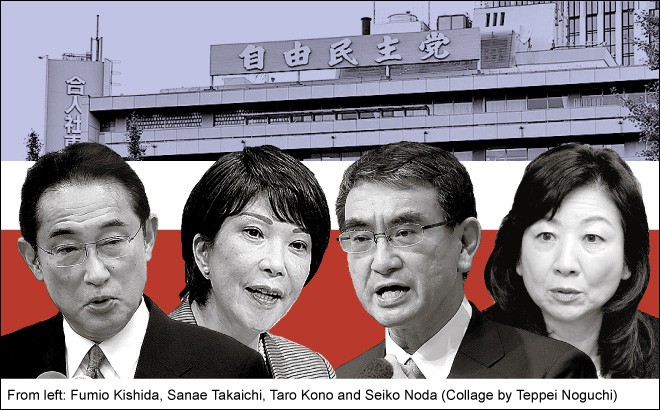 The race officially began on Sept. 17 for the presidency of the ruling Liberal Democratic Party and, in effect, the prime minister’s post in what is expected to be a tight and unusual election.

This is the first LDP presidential election with more than one female candidate.

The vote on Sept. 29 will be determined by 766 ballots: 383 distributed to LDP prefectural chapters and the same number to LDP lawmakers.

Unlike the LDP presidential election last year, all 1.1 million or so party supporters will have a chance to vote.

In the 2020 election when Yoshihide Suga was elected, prefectural chapters were each given three votes that chapter executives decided how to cast.

Kono held an event online on the morning of Sept. 17 to officially kick off his campaign.

“I want to create a nation in which everyone shares in the idea of gaining whatever they are seeking by extending their hands and doing their best,” he said.

Kono said if he was elected he would work to reform social welfare policy, such as the pension system, medical care and care for the elderly.

Kishida met with reporters outside of the residential complex in Tokyo for Lower House members and said: “I want to directly hear the voices of the people. I want to change the LDP by recovering trust through policy discussions. Those are the points I want to focus on.”

He stressed the importance of correcting the economic disparity in the nation by providing support to the middle class.

Takaichi kicked off her campaign in the Diet building.

Wearing a face mask, she said: “I want to protect Japan and clear a course for the future. I want to work with all of you to create a beautiful, strong and growing nation for Japan.”

Dubbing her package of economic measures “Sanaenomics,” Takaichi said she would implement a fiscal stimulus package that goes beyond that of Shinzo Abe when he was prime minister.

Also wearing a face mask, she said: “Politics is not conducted by a strong leader. A party that dignifies itself as a people’s party must involve many people who work to create many kinds of happiness.

“I want to transmit to everyone the satisfaction that they were born in this nation and have value to go on living.”

She said she would emphasize policies that support children, women and elderly people.

In a break from tradition, all major LDP factions, with the exception of the one led by Kishida, will let members decide on their own in the party election instead of unifying support behind a single candidate.

That opens up the possibility that no candidate will win an outright majority in voting on Sept. 29. If that happens, a run-off will be held between the two candidates who received the most votes in the first round.

At a joint session on Sept. 17, the four candidates laid out their plans should they be victorious.

Touching upon the fact that he achieved 1 million COVID-19 jabs a day after being put in charge of the central government’s vaccine rollout, Kono said, “I hope you will allow me to exercise my ability to take action.”

Among the policy proposals he presented were tax cuts for companies that encourage employees to work remotely, move their offices from Tokyo, and raise salaries.

Kono said the Abenomics package of economic measures did help the economy, but it had little impact on increasing workers’ wages.

“Returning to the starting point, I listened to the voices of many people over the past year,” Kishida said. “The people think that their voices are not reaching the LDP. Now is a time when the people are calling for a political sector that humbly and seriously listens to the diverse views that the people hold.”

Among the proposals he presented for supporting the middle class were funds to help cover housing and education expenses as well as efforts to raise the salaries of nurses and day care workers.

Reflecting her conservative views that are in line with Abe, Takaichi again stressed that she would make the greatest effort to write a new Constitution.

She also laid out a number of proposals regarding national security, including revising the Japan Coast Guard Law to strengthen measures against maritime advances by China.

She also promised to increase the defense budget and pass legislation to give the Self-Defense Forces first-strike capability against enemy bases preparing an attack on Japan.

To deal with the novel coronavirus pandemic, Takaichi pushed for the early development of domestic vaccines and drugs to treat the illness.

Noda pointed out that the other candidates said very little about helping the socially disadvantaged, such as children, women and elderly and disabled people.

She said she would place top priority on dealing with the pandemic if she won.

Saying there was a need for early detection and treatment, Noda said she would do away with the practice of pushing COVID-19 patients to recuperate at home and instead set up temporary medical facilities to treat patients who develop serious symptoms.

To help people overcome the economic suffering from the pandemic, Noda said she would distribute lump-sum payments to all workers, including those in part-time positions.

She also said she would establish a “children’s agency” that would coordinate various programs to help raise and educate children.