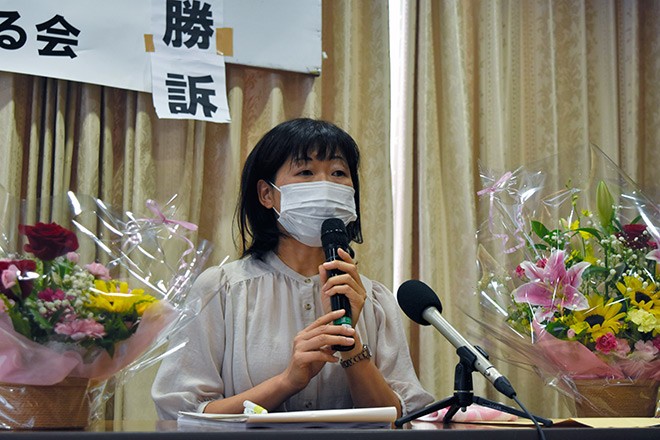 The widow of a Toyota Motor Corp. employee who killed himself after suffering depression speaks at a news conference in Nagoya on Sept. 16. (Haruka Ono)

NAGOYA--The high court here ruled on Sept. 16 that the 2010 suicide of a Toyota Motor Corp. employee was due to power harassment and overwork that plunged him into depression, overturning a lower court ruling that rejected any tie between his work and condition.

The Nagoya High Court, in its ruling, accepted a claim by the man’s bereaved family that his suicide should be certified as work related, saying the man developed depression because of being repeatedly castigated by his bosses and being assigned exhausting tasks.

“I’m glad that the court recognized my husband’s hard work and the power harassment he suffered,” the 50-year-old widow of the man said at a news conference.

The man, 40, joined Toyota Motor in 1990 and prepared the production of automobile parts.

In April 2008, he became a chief at auto parts production lines for the new model of Prius. He developed depression around October 2009, when he was in charge of car parts production preparation at a subsidiary in China, and committed suicide in January 2010.

The high court ruling noted that the man suffered mental stress due to demanding tasks overseas and work related to the production of the new Prius.

The court also assessed the impact of reprimands from his bosses on the man based on criteria for certifying work-related mental illness that were applied in June 2020, shortly before the Nagoya District Court rejected the plaintiff’s claim in a ruling issued the following month.

The high court ruling recognized the reprimands from the bosses, involving shouting at the man in front of his colleagues, as mental attacks that went beyond a socially acceptable level.

The high court ruled that the man suffered “strong” mental stress after he had repeatedly faced such severe admonishments for nearly a year.

The latest ruling also noted that there were “chronic malfunctions” at automated car parts assembly lines for the Prius that the man had been assigned to between around April 2008 and September 2009.

The ruling said Toyota prioritized starting the mass production of the model as scheduled despite anticipated malfunctions at the assembly lines where the automaker was introducing a new advanced approach.

As a result, the man was tormented by being caught in the middle between his bosses at the head office and staff on the production lines, according to the ruling.

The Toyota Labor Standards Inspection Office in Aichi Prefecture said it will decide on its response to the ruling after examining it and discussing the matter with related organizations.

“We regret that we, as a company, failed to listen to the voice of the employee and reach out to him,” said a Toyota Motor public relations official. “We will continue making efforts to create an open corporate culture where all employees can work with a sense of security.”

The Nagoya District Court, in its ruling in July 2020, ruled that reprimands from the man’s bosses and mental stress from his work were not severe enough to cause mental illness based on the criteria before the revisions were applied in June that year.

It dismissed the plaintiff’s claim by concluding that there was no causal relationship between the onset of the man's depression and his job.