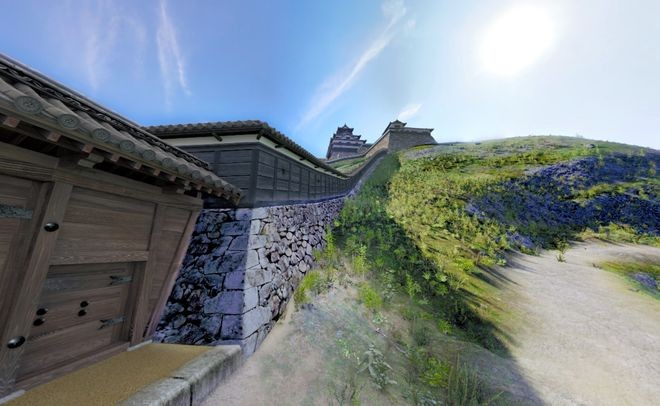 YONAGO, Tottori Prefecture--All that remains of Yonago Castle, an impressive feudal-era fortress here designated by the government as a historic site, are the hand-hewn stones that form the base.

The city government, keen to promote the ruins to give tourists a better understanding of how the structures once looked, released digitally reconstructed images in virtual reality (VR) format on a free smartphone app called StreetMuseum that offers six viewing spots across the complex.

The structures of Yonago Castle in or after the mid-Edo Period (1603-1867) are featured in high-precision 3-D CGI imagery, according to officials at the culture promotion section of the city government.

They include two main keeps, "nobori-ishigaki" vertically sloped stone walls that form the base, a square-shaped "masugata" gate, the Ninomaru palace and the "Kurogane-gomon" gate.

In addition, an augmented reality (AR) card allows users to use their smartphones or other devices to view Yonago Castle in its entirety with its two main keeps.

StreetMuseum is also available at Matsue Castle and the Izumo Taisha shrine in Shimane Prefecture. The Yonago Castle ruins are the first in Tottori Prefecture to feature on the app.

The VR images can only be viewed on site. But once the app is uploaded, they can also be viewed later.

The AR card will be distributed at tourist information offices and related facilities in the city as well as guided tours.

"The app makes it easier to understand the structures that once stood here," a city official said. "Because we are still in the coronavirus pandemic, we hope local residents will be the first to heighten their interest in the site before tourists from elsewhere start doing the same."