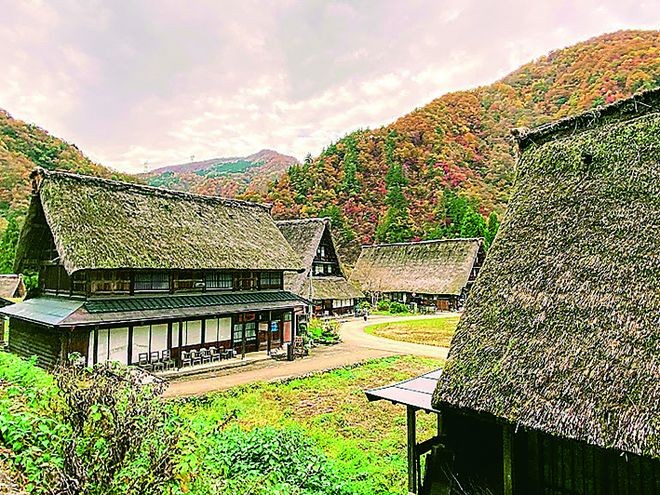 "Gassho-zukuri" houses stand in a nature-rich area in southwestern Toyama Prefecture. Gokayama is a UNESCO World Heritage site, famous for its many thatched A-frame buildings. (Photo by Lisa Vogt)

Without giving it much thought, many Japanese join their palms and fingers together in front of their faces and chests to do "gassho," the gesture for praying.

At first, I thought the gesture was reserved for temples and shrines, but I soon found that Japanese do gassho throughout the day. Before meals, when saying, “itadakimasu,” and afterward, “gochisosama.” Before the deceased or in front of tombs, when thanking someone, expressing an apology, and asking someone to do something for you. Gassho is everywhere.

What I especially love about Japan, among millions of other things, is that many people, without being overly conscious of it, live in harmony with invisible powers that be--various gods. Hit Japanese anime and movies most often have an element of “humans living on this plane” and “another dimension.”

The beauty of the Japanese way is that you don’t take everything for granted, and there’s an awareness that we may be kept alive by invisible influences.

These are the thoughts that went through my mind at Gokayama in Toyama Prefecture as I marveled at the "gassho-zukuri" structures scattered about the beautiful countryside. The steeply angled, triangular thatched roofs resemble hands in prayer, hence, gassho-zukuri, or "prayer-made."

Offering more rural charm than the more famous Shirakawago in Gifu Prefecture, Gokayama allows you to peacefully stroll around without seeing many tourists. There are few places left where clusters of such houses are preserved in their original location.

The houses here are inhabited, and perhaps to the dismay of some, you can see subcompact cars with yellow plates, and personal laundry hung out to dry. I thought such authenticity adds a charming touch, one that is so often missing at sanitized museum-like tourist draws.

As with numerous places around the country, legend has it that the defeated warriors of the Taira (Heike) Clan settled here in the 12th century. As is often the case in harsh and snowy environments unsuitable for agriculture, villagers made a living with sericulture (enabling light to filter through the gabled roof) and "washi" papermaking.

Unlike similar places, Gokayama also produced, in secret from the shogunate, saltpeter. This chemical was used to make gunpowder for firearms for the Kaga Clan, which ruled the area during the Edo Period (1603-1867).

I noticed most buildings had a large rectangular pool, the length of the structure, beside them. I saw no fish, and it didn’t look like a swimming pool. I asked a woman watering plants and she said it was for the snow on the roof to slide off and into.

I was reminded to see the unseen and bowed with a heartfelt gassho.

This article by Lisa Vogt, a Washington-born and Tokyo-based photographer, originally appeared in the Sept. 19 issue of Asahi Weekly. It is part of the series "Lisa’s Wanderings Around Japan," which depicts various places across the country through the perspective of the author, a professor at Meiji University.