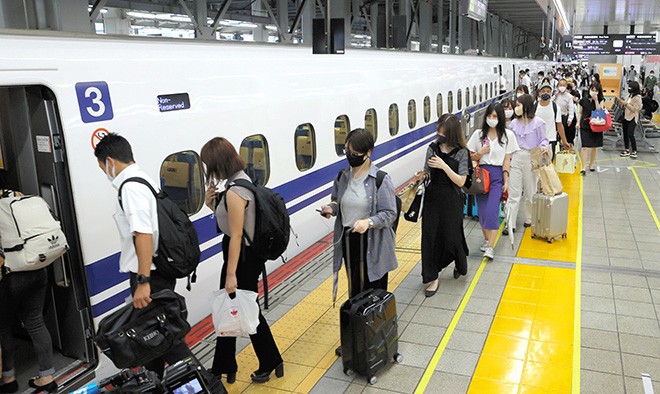 Passengers board the day’s last Shinkansen bound for Tokyo at Hakata Station in Fukuoka around 1:30 p.m. on Sept. 17 because services were suspended due to the approaching Typhoon No. 14. (The Asahi Shimbun)

Typhoon No. 14 is expected to make landfall in the northern Kyushu region as early as the late afternoon of Sept. 17 and may approach eastern Japan through Sept. 18, bringing heavy rains to wide areas.

The typhoon was moving east-northeast over waters about 110 kilometers west-northwest of Goto, Nagasaki Prefecture, as of 10 a.m. on Sept. 17, according to the Japan Meteorological Agency.

It had a central barometric pressure of 990 hectopascals, maximum sustained winds of 90 kph near the center and maximum instantaneous gusts of 126 kph.

The typhoon is expected to move over the Shikoku and Kinki regions through Sept. 18 and travel along the Pacific side of eastern Japan.

Extremely strong winds are likely over wide areas from western to eastern Japan through Sept. 18.

Expected maximum sustained winds are 90 kph in northern Kyushu; 82.8 kph in the Chugoku, Shikoku and Kinki regions; and 72 kph in the southern Kyushu, Tokai and Kanto-Koshin regions as well as Hokkaido.

Shikoku is forecast to receive up to 300 millimeters of rainfall, 250 mm for Tokai and 200 mm for Kinki and Kanto-Koshin over the 24 hours through noon on Sept. 18.