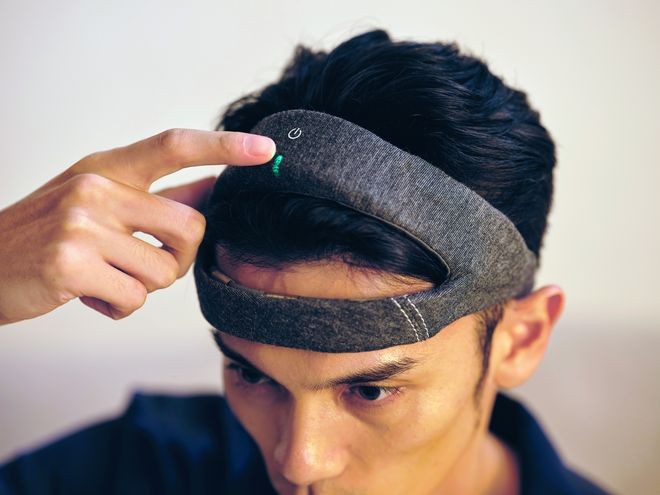 Japanese companies are heightening their research into “brain technology,” a rapidly expanding field that envisions products ranging from advanced marketing tools to programs that can move objects with thoughts.

But like their overseas counterparts, Japanese developers face a number of hurdles in their applications of studies on brainwaves and other cerebral functions.

Ethical questions have already been raised about advanced technology that delves into--and may even become part of--the organ that defines human identity.

And while some brain technology products have been cleared for medical use in Japan, the reliability of other applications has not been proved.

Questions have even been raised over whether the purported effects of certain products and services are actually based on science.

Cosmetics giant Shiseido Co., an early entrant in the field, is using neuroscience as a selling point.

Labeling of its core Maquillage brand products say: “They were born from research to ascertain what people ‘intuitively find beautiful and comfortable’ with an eye on brain science and other fields.”

The company in the 1980s started studying changes in cerebral waves, brain blood flow and other elements for cosmetics research.

Six lipsticks with different levels of hardness were tested on 30 women. When lipsticks were easier to apply, the subjects’ cerebral sections connected to value judgments showed significant changes in blood flow, the company said.

Shiseido says this method of testing provides a more accurate gauge on what customers prefer.

“Questionnaire surveys are prone to present biased results, but cerebral responses reflect subconscious thoughts,” said Keiko Tagai, an official at Shiseido’s Mirai research and development center. “We will forge ahead with our studies while presenting scientific evidence in a clear manner.”

Leading printing company Toppan Inc. in April began working out designs based on its findings in brain science.

Cerebral blood flow changes and eye movements were analyzed on test subjects when they were shown multiple arrangements for pamphlets and advertisements.

The collected data will be used to determine what patterns attract more attention and are easier to memorize, Toppan officials said.

Some products are touted as designed to improve health and the thought process of individuals.

In 2019, Philips Japan Ltd., the Japanese subsidiary of Koninklijke Philips NV, a major medical equipment maker in the Netherlands, released Deep Sleep Headband for 51,700 yen ($472) after tax to “improve the quality of your sleep.”

The sensor-equipped head gear plays the gentle sound of pattering rain to induce sleep and the sound of birds chirping to rouse one from bed.

If the device detects brainwaves at a certain level, it emits small tones that enable the user to sleep deeply for far longer, the company said.

Users of the app wear a sensor-mounted headband that examines cerebral conditions.

A tune with noise in background is played on the smartphone. The music becomes clearer if the user relaxes to produce significantly strong alpha waves, which are believed to improve short-term memory and heighten concentration.

Matsumoto Yamaga FC, a soccer team that competes in the J2 division of the professional J.League, started having its players use Alpha Switch earlier this year.

“It is important for athletes to concentrate at critical points of time,” said Fumiyuki Kanda, president of the team’s operating company. “I expect the technology to help our players to concentrate better and switch on and off quickly in life.”

Companies in Europe, the United States and elsewhere have taken the lead on advanced neuroscience technologies.

Neuralink Corp., headed by Elon Musk, the founder of U.S.-based Tesla Inc., is working on a technique to connect a communications chip embedded in the brain with a computer to use “thoughts” to move prosthetic limbs and other tools.

Facebook, also based in the United States, is developing a system to allow computer users to enter text just by thinking about the characters.

According to a 2018 estimate by Mitsubishi Research Institute Inc., global sales of brain technology products are expected to increase by 40 percent from 2016 to 4.5 trillion yen in 2024.

Atsuya Fujimoto, an official at the institute, said, “A large need exists for diagnosis and treatment of dementia, depression and other ailments in medical fields.”

The spread of the technology is being driven by more advanced devices to monitor cerebral activities.

Conventional measuring devices used at medical centers and research facilities have typically weighed 100 kilograms and cost up to 10 million yen.

Now, smaller instruments that cost tens of thousands of yen have been made available, making it easier for businesses to incorporate them into consumer-oriented products.

Smartphone apps using the meter have rolled out, including a brain training game. Related services cost around 30,000 yen for two years.

PGV Inc., an enterprise of Osaka University, created a stretchable electrode sheet that is applied to the forehead and is combined with a tiny 27-gram brainwave gauge.

The Japanese government recognized such instruments as medical equipment in summer last year.

They are expected to be used for academic objectives, such as identifying early signs of dementia, as well as commercial applications by companies.

However, the effectiveness, safety and ethics of brain technology products remain in question.

A report released in a U.S. scientific journal in 2019 said only eight of 171 brain-technology products sold in Europe and the United States to relieve stress properly cited evidence-providing theses.

“It would be difficult for ordinary people to decide whether certain products and services are based on scientific evidence,” said Ryota Kanai, head of the brain science group working under the Cabinet Office’s research and development project.

A research team headed by Kanai set up a framework for experts in July to assess the trustworthiness of methods and findings used for brain technology-relevant products.

The survey results will be released next fiscal year.

“Creating a mechanism to enable people to believe in technologies will help develop new industries and contribute to the advancement of science,” Kanai said.

Some experts have raised concerns about the intrusiveness of brain technology, such as projects aimed at changing people’s behavioral patterns or revealing what they are thinking.

“How far technologies can intervene in human brain activities poses a problem,” said Takuya Ibaraki, an official at NTT Data Institute of Management Consulting Inc., who is knowledgeable about brain technology.

“Operators are required to introduce ethical standards while allowing citizens to participate in the process,” he said.