Now you see me, now you don't speck of rock is back again 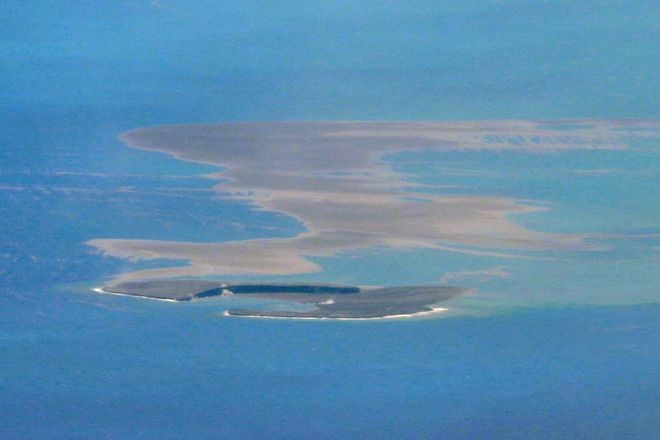 A new islet shaped like a horse hoof at Fukutoku-Okanoba on Aug. 15 with rock debris floating in the ocean (Provided by the Japan Coast Guard)

A speck of rock far out to sea that has periodically emerged for more than a century only to vanish again seems to offer Japan the tantalizing prospect of one day being able to expand its territorial waters and exclusive economic zone.

Whether the outcrop in the Ogasawara island chain 1,300kilometers south of Tokyo will ever establish itself as an island is anyone's guess at the moment.

A submarine volcano called Fukutoku-Okanoba that lies 5 km northeast of Minami-Iwoto in the island chain is one of 10 such undersea geographical features around the Izu-Ogasawara Trench.

Fukutoku-Okanoba is said to have been named after the “okanoba” fishing grounds discovered in bygone days near the volcano by a fishing boat called Fukutoku Maru.

According to the Japan Meteorological Agency, Fukutoku-Okanoba last erupted Aug. 13, sending up plumes of smoke and ash at least 16,000 meters into the air.

A Japan Coast Guard aircraft used for patrols reported Aug. 15 that the new isle is shaped like a horse hoof.

The newly formed islet at Fukutoku-Okanoba, according to the Geospatial Information Authority of Japan, is gradually diminishing in size, though. The island was confirmed to have split into two parts with east and west sides, like a parenthesis, on Aug. 17, four days after the eruption.

The JMA collected rock specimens from the eruption on Aug. 22 using its maritime meteorological observation vessel in waters 300 km northwest of Fukutoku-Okanoba. A chunk of pumice volcanic rock found drifting after the eruption went on public display Sept. 8.

Despite its diameter of 40 centimeters, the rock only weighed 5 kilograms and remained buoyant due to its many trapped air bubbles.

“This type of rock is vulnerable to wave erosion,” noted Masamichi Nakamura, a volcanic activity analyst at the JMA’s earthquake and volcano department who believes it originated from the eruption in Fukutoku-Okanoba.

The new island near Nishinoshima was formed as lava streams cooled and became solid. However, the speck of rock seen around Fukutoku-Okanoba is made of different volcanic material. For this reason, “The isle will not likely survive like Nishinoshima in this situation,” Nakamura said.

COME AND GONE FOR A CENTURY

A new islet has periodically emerged in the area. Sightings were made in 1904, 1914 and 1986 following volcanic eruptions. But they all dissipated into the sea, apparently due to wave erosion.

One question on the minds of many experts is whether the islet will ever fully establish itself as legitimate territory that would allow Japan to expand its territorial waters and EEZ.

Continuing volcanic activity makes it difficult to chart and survey the area, the coast guard said, noting that changes in territory and EEZ are approved internationally only after new islands are included in official charts.

“Japan's territory and EEZ could be larger based on the outcome of measurements,” said a coast guard representative. “But we can say nothing about that at the moment as current circumstances do not allow us to properly survey the isle.”