EDITORIAL: Bleak legacies of Abe and Suga a key test for LDP hopefuls 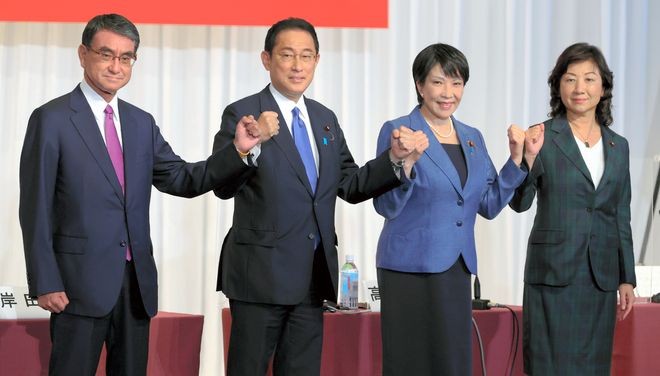 The four candidates in the Liberal Democratic Party presidential election, from left: Taro Kono, Fumio Kishida, Sanae Takaichi and Seiko Noda, at a joint news conference in Tokyo on Sept. 17 (The Asahi Shimbun)

The winner will be confronted from day one with the task of leading Japan’s efforts to bring the novel coronavirus pandemic under control and immediately face the public's verdict on the new administration in the Lower House election that must be held this autumn.

We urge the candidates to compete for support not only from party members to their prescriptions for tackling key policy challenges facing the nation. If they are to regain public trust in the ruling party, they also need to offer their overall assessments of the achievements and failures of Abe’s seven years and eight months in office and Suga’s one-year tenure as well as demonstrate how they intend to clean up the negative legacies of those two leaders' policies.

In the LDP presidential election last year, held in haste after Abe abruptly announced his resignation due to health issues, Suga was a shoo-in. Since the party’s card-carrying members or registered supporters were not allowed to cast votes and almost all major party factions backed him, Suga swiftly secured an overwhelming majority of votes of the LDP Diet members and had his victory in the bag before the race began.

This time around, the picture is quite different. All major LDP factions, with the exception of the one led by Kishida, will allow members to decide their votes instead of unifying support behind a single candidate. Rank-and-file LDP members and supporters will also cast ballots. The presidential hopefuls will compete for a total of 766 votes, with half of them allocated to LDP lawmakers casting one ballot each. The remaining half will be distributed according to how the 1.1 million members and supporters nationwide cast their ballots. If no candidate wins an outright majority in voting on Sept. 29, a run-off will be held between the two candidates who received the most votes in the first round. There is no clear frontrunner.

During their first campaign speeches after the race kicked off, all four contenders talked about serving the people.

Kishida said the nation’s democracy is facing a crisis as public trust in politics, vital for the health of democracy, has collapsed. He pledged to pay careful attention to the voices of the people and take a humble approach to politics. He also vowed to pursue politics that embraces diversity in opinions. Noda argued the LDP in its current form is divorced from the feelings of the people and needs to deeply reflect on its political approach. Kono concurred, stressing that politics is for the good of the people and vowing to try to rebuild politics that can win the sympathy of the people. Takaichi chimed in, saying she would marshal the basic strengths of the national party to protect the lives and security of the people.

But these promises will sound hollow unless they are substantiated by specific policies. One key test of their commitments to serving the people will be how they handle the political scandal concerning the dubious sale of state-owned land to Moritomo Gakuen, a school operator indirectly linked to Abe. Despite the doctoring of official public documents, efforts to get to the bottom of the scandal failed miserably. No politician has been held accountable for the unprecedented misconduct by officials at the Finance Ministry.

In a Sept. 17 joint news conference, Noda said she will allow a fresh probe into the scandal, while Kono expressed skepticism about the idea. Kishida also showed a reluctance to reopen the investigation, while Takaichi declined to comment on the issue, citing the fact that a court is hearing a related case.

All four politicians held Cabinet or key party posts under Abe and Suga. If they are aware of their political responsibility for the acts of the two administrations, they should face up to the negative legacies of the past two administrations and provide effective political leadership to eliminate them.

One policy issue that has emerged as a key campaign topic is a proposal to allow married couples to use separate surnames. Noda is a staunch advocate of the proposal. Kono has also expressed his support.

Takaichi is vigorously against the idea. Kishida is apparently treading cautiously to avoid antagonizing party members opposed to the proposal, but he must be sympathetic to the idea given that he is a promoter of a group of lawmakers campaigning for a legal change to the measure. All four candidates should engage in in-depth debate on the issue so voters will know where they stand.