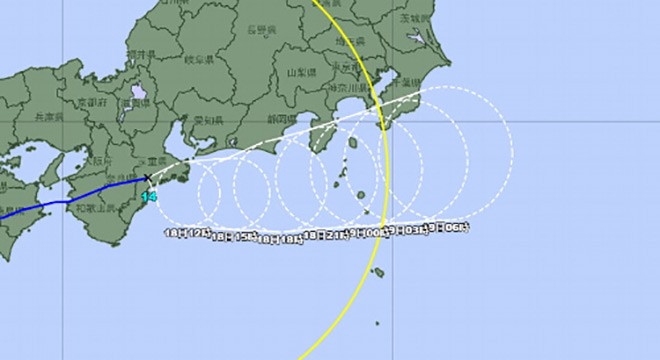 The estimated course of Typhoon No. 14 as of 8 a.m. on Sept. 18 (Captured from the Japan Meteorological Agency website)

Typhoon No. 14 twice made landfall while dumping heavy rains across a wide swath of the nation that prompted warnings of possible landslides and flooding along Pacific coastal areas of eastern Japan.

After making landfall in Fukuoka Prefecture on the main southern island of Kyushu, Typhoon No. 14 cut across the island of Shikoku and made landfall again on the morning of Sept. 18 in Wakayama Prefecture, western Japan.

The Japan Meteorological Agency said Typhoon No. 14 was hovering close to Toba, Mie Prefecture, at 10 a.m. on Sept. 18 and moving in an easterly direction.

It had a central barometric pressure of 1,000 hectopascals, maximum sustained winds of 64.8 kph near the center and maximum instantaneous gusts of 90 kph.

It was expected to be downgraded to a tropical depression in the afternoon as it moved along the Pacific coast of the Tokai region. It was forecast to move past the Izu chain of islands on Sept. 19.

Heavy rains fell over a wide area of western and eastern Japan from early Sept. 18. Among areas that received very heavy rain over the course of an hour were Sumoto, Hyogo Prefecture, with 79 millimeters, Kumano, Mie Prefecture, with 78.5 mm and Ebina, Kanagawa Prefecture, with 65.5 mm. Central Tokyo recorded 31.5 mm.

A maximum instantaneous gust of 100.8 kph was recorded before 2 a.m. in Muroto, Kochi Prefecture.

For the 24-hour period until noon Sept. 19, as much as 150 mm of rainfall was forecast for the Kanto-Koshin region and 80 mm for the Tokai region.