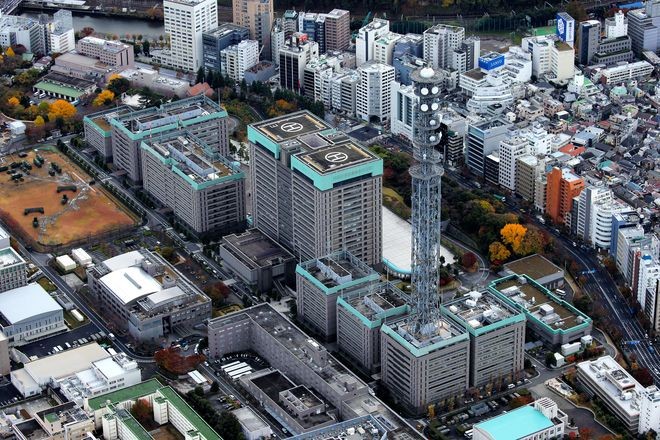 The Defense Ministry, in Tokyo’s Ichigaya district, is seen in an aerial view from aboard an Asahi Shimbun helicopter. (Asahi Shimbun file photo)

The Defense Ministry plans to marshal YouTube stars and other key opinion leaders to help it lobby for a bigger defense budget.

It aims to recruit online influencers and other influential figures to make its case to the public about the “tough security environment” now surrounding Japan.

The new plan comes against a backdrop of a growing sense of alarm within the ministry about how Japan is trailing China in defense spending. That gap is only widening.

But some ministry officials have expressed concerns about the public opinion campaign. They raised questions toward the foregone conclusion of a need for more budgeting and whether its goals can be achieved by winning over the support of such influencers.

“The measure is all too blatant,” one senior ministry official said. “The ministry should offer explanations to the public on its own and call for their understanding if there is a need to have the budget increased.”

The ministry set to work earlier in September to pick around 100 targets for its campaign.

Department officials said a document describing the plan was presented internally earlier in September. It sets an objective of “realizing a drastic increase in the defense budget” and outlines a plan for the ministry to “work as one” to recruit experts and other influencers to make the push.

The campaign will target “scholars, experts and media personalities who have influence with the public and who are not specialists in defense and security.” The document calls on ministry insiders to recommend candidates for the work.

Specifically, it suggests an academic on the Fiscal System Council, which is an advisory panel to the Finance Ministry, an entertainer who frequently appears on TV shows, and a YouTuber.

According to the document’s road map, the ministry will prepare explanatory materials for an audience unfamiliar with defense affairs and various ministry bureaus will make interview appointments with the key individuals.

Senior ministry officials, including division directors, will be assigned to brief the opinion influencers on the difficult security situation the country faces.

The canvassing will start in September and last until sometime before the upcoming Lower House election, the document said.

The ministry has long dreamed of increasing Japan’s defense spending beyond 1 percent of the country’s gross domestic product. Defense expenses accounted for 0.95 percent of GDP in the initial budget for the current fiscal year.

The ministry made the initial budget request totaling nearly 5.5 trillion yen ($49.8 billion) for fiscal 2022, the second largest ever. The department is hoping to have more than 1 percent of GDP allocated to defense in the initial budget to be compiled by the end of this year.