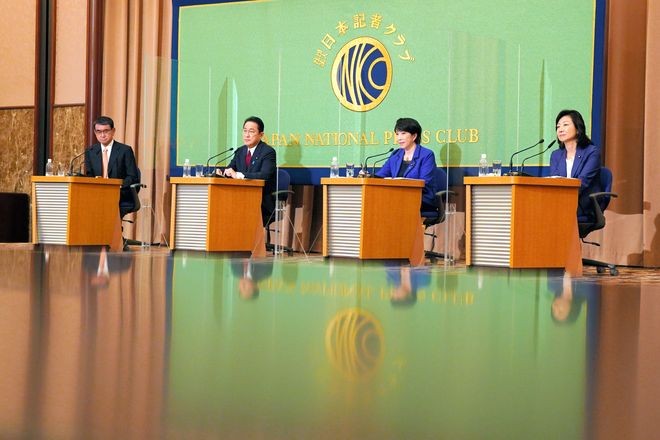 The four candidates in the Liberal Democratic Party presidential election, from left: Taro Kono, Fumio Kishida, Sanae Takaichi and Seiko Noda, during a debate in Tokyo on Sept. 18 (The Asahi Shimbun)

Two leading candidates to become Japan's next prime minister denied on Saturday that they had toned down their stances on nuclear energy and gender issues to attract conservative backing in a tight ruling party leadership election this month.

The winner of the Sept. 29 party poll to succeed Prime Mininster Yoshihide Suga, who said two weeks ago he would step down amid tanking voter ratings, is almost certain to become premier because of the LDP's Lower House majority.

Surveys of voters show Kono is their top choice, a key factor ahead of a looming general election. But the social-media savvy, U.S.-educated former foreign and defense minister also has an image as a maverick that worries many elders in the LDP.

Contenders need to attract votes from both grassroots party members and younger lawmakers likely to be swayed by popularity ratings as well as party bosses who still have clout, although less than in the past.

Long seen as a critic of nuclear power, Kono rejected the suggestion that he had flip-flopped.

"What I've been saying about an exit from nuclear power is decommissioning quickly nuclear power plants that are reaching retirement and gradually exiting nuclear energy," he said in a televised debate. "As I explained before, we should stop the use of coal, increase energy conservation and renewable energy and nuclear power can be used to fill the gap."

Kishida, a more traditional LDP consensus-builder saddled with a bland image, was asked whether he had back-pedaled over allowing married couples to have separate surnames.

Japanese law does not permit that option and a change is strongly opposed by conservatives - including candidate Takaichi - who say it would undermine family values.

Asked about the impression that he had earlier favored the change, Kishida said he recognized diversity but that questions remained as to how to treat children's names under a new system.

"At least considering the broad understanding of the people, I think that discussion is necessary now," he said.

In the wide-ranging debate on topics from the COVID-19 pandemic to pensions and diplomacy, Kono, a former foreign and defense minister, urged dialogue with China amid growing concerns about its maritime assertiveness, a stance echoed by Kishida.

"(Japan-China) summit meetings should be held regularly," he said. "Perhaps, we should tell the Chinese leadership to exert their power as one of players in the international order, not in the way of expansionism."

Highlighting the predominant view emerging among politicians ahead of the general election, Kishida - considered the most hawkish on fiscal policy among the candidates - said he wouldn't raise the sales tax rate for a decade and instead prioritize revitalizing the economy over fiscal reform.

The uncertain outcome of the LDP race contrasts with last year, when Suga quickly emerged as the leading candidate after Shinzo Abe quit citing ill health after a nearly eight-year term that made him Japan's longest serving premier.

Party factions coalesced around Suga, Abe's long-time lieutenant, and grassroots members had minimal say. This time, most factions are not unified and rank-and-file members will be apportioned the same number of votes as lawmakers.

But if no candidate takes a majority in a first round, a run-off between the top two will be held and grass-root members votes will be diluted, potentially boosting Kishida's chances against Kono.

Takaichi and Noda, vying to become Japan's first female premier, are seen as long-shots, although Takaichi has the backing of Abe and other party conservatives.