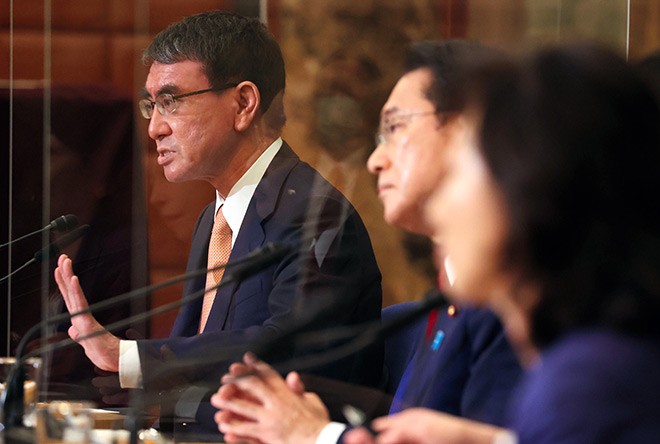 Taro Kono, one of the frontrunners in the race to become leader of the ruling Liberal Democratic Party, drew a barrage of questions from his rivals when he proposed a sweeping overhaul of the social security system during a debate held at the Japan National Press Club in Tokyo on Sept. 18.

Reform of the nation’s pension system dominated much of debate with Fumio Kishida, a former foreign minister and LDP policy chief, Sanae Takaichi, a former communications minister, and Seiko Noda, executive acting secretary-general of the LDP. Kono is the minister of administrative reform in charge of the nation's vaccine rollout program for the COVID-19 pandemic.

Japan’s pension system has three tiers. The first tier is the basic pension followed by employee and corporate pension contributions.

The payment of the basic pension benefits is funded by premium contributions and consumption tax revenue.

Those unable to contribute the full amount of basic pension premiums will receive a smaller payout, guaranteeing they will struggle to make ends meet as they age.

Kono’s proposal for establishing a system that guarantees a minimum social security payment regardless of the amount of contributions made is aimed at plugging a hole in the safety net to help such people survive in old age.

The big question is how to come up with the funds to turn it into a reality.

Asked how he would finance the planned system, Kono said, “We can help rein in the total of basic pension benefits by not paying benefits to those who have a certain level of income and assets.”

But Takaichi did not buy his argument, saying it was simply not feasible.

Kishida pressed Kono to explain what increase in the consumption tax rate he had in mind to make the proposed system happen.

Referring to the former Democratic Party of Japan’s proposal in 2009 for setting up a similar basic pension system guaranteeing 70,000 yen a month, Kishida said: “At the time, it was said the consumption tax rate must be increased by 8 percentage points to achieve it. But it was not regarded as feasible. What figure were you thinking for an increase?”

The fact remains that some people cannot afford to pay basic pension premiums and others have no option other than to turn to welfare benefits as the amount they receive in basic pension is too low under the current national basic pension model that is deemed the minimum to allow people to survive.

Another factor is that basic pension benefits are expected to decline under the existing setup because it is supported by contributions paid by a shrinking pool of people still working.

To counter Takaichi and Kishida, Kono asked how they intend to sustain the system for young people “unless we overhaul the social security system now.”

Campaigning for the LDP leadership race kicked off Sept. 17 and voting will be held Sept. 29.

In a separate development, with the death of LDP heavyweight Wataru Takeshita, the number of ballots cast by LDP lawmakers as well as rank-and-file members dropped by one to 382 in each group. Takeshita died of cancer on Sept. 17. He headed an LDP faction and was a brother of former Prime Minister Noboru Takeshita.