COVID-19 cases among kids rises sharply due to vaccine policy 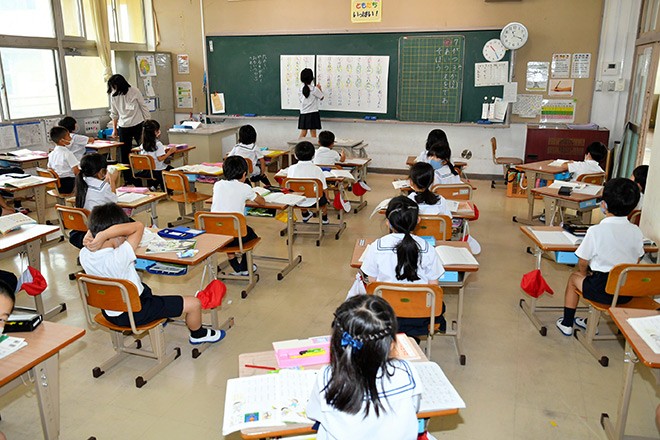 Desks are placed with more space from each other at a school in Fukuyama, Hiroshima Prefecture, as a precaution against the novel coronavirus, in July. (Asahi Shimbun file photo)

The ratio of children aged 18 or younger with COVID-19 is now close to one-quarter of the nation's overall caseload total, according to the National Institute of Infectious Diseases (NIID).

Children younger than 12 are not eligible to receive inoculation jabs under current vaccine rollout regulations.

Cases began to spike in August after beginning to mark steady growth from April.

The surge in the ratio of minors in that age bracket against the overall total was due mainly to a lack of access to vaccines, NIID researchers said.

“COVID-19 cases among children may spread further in the coming months as elementary school children and younger are not allowed to get vaccines,” warned Takaji Wakita, the head of the NIID who advises the health ministry on its response to the pandemic. He made the comment at a Sept. 16 news conference.

In contrast, the ratio of people aged 65 or older has declined sharply against the overall total of case numbers since April after they started receiving jabs.

The figure is now down to 10 percent or lower, although seniors represented more than 25 percent of the total of infections before.

Health ministry data showed that the primary source of infection among children was in the home. As they grow older, the ratio of children who contract the virus at school starts to rise since they engage in various school activities.

Elementary schools are witnessing an increase in cluster infections.

For the week from Sept. 6, there were 32 such infections, a more than three-fold increase from the figure for the preceding week.

It represented the largest number of cluster infections since April, when data in this area first began.

The jump is likely due to the opening of a new school semester after the end of the summer vacation, health experts said.

They called for children to be protected from the virus by ensuring that their family members and teachers are fully vaccinated.