From ‘Beery’ to ‘Drafty,’ drinks with low alcohol on rise in Japan 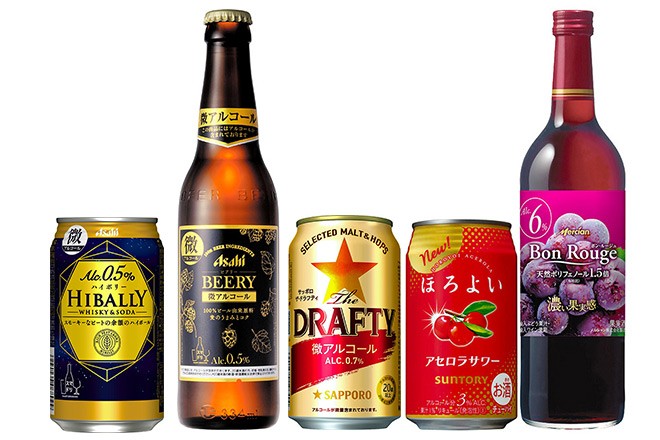 The alcohol drinkers' dilemma--how to knock back a few but minimize the hangover odds when doing so.

Japan's alcohol beverage makers, seeing yen signs in quenching the thirst for the answer, are serving up an increased variety of low-alcohol drinks that cater to such people, who aren't satisfied with non-alcohol drinks alone.

A number of companies are unveiling new beverages to meet the rising demand from a growing wave of health-conscious consumers and customers drinking at home more due to the pandemic.

The company's Beery, a beer-like beverage with an alcohol content of 0.5 percent, targets first-time drinkers and consumers in their 20s and 30s said to be shying away from regular beer. It has seen high sales since being released nationwide in June.

With many eateries adding the beverage to their menus, Asahi has also been providing Beery in small bottles for restaurant operators since September.

On Sept. 14, Sapporo Breweries Ltd. released the Drafty, a beer-like beverage with an alcohol content of 0.7 percent.

Made with draft beer brewed from 100-percent malt, it is crafted to produce a savory malt flavor, the company said.

Suntory Spirits Ltd. on Aug. 31 shored up its 3-percent alcohol Horoyoi series of shochu-based canned "chuhai" beverages, which it first introduced in 2009, adding Acerola Sour to the 15 varieties it has been selling annually.

"It has become important to enrich our varieties when people have an increased number of opportunities to drink at home," a Suntory Spirits representative said.

Japan's market for low- and non-alcoholic beverages is big business. Beverages with an alcohol content of 3 percent or less raked in 105.8 billion yen in 2020, according to a survey conducted by marketing company Intage Inc., growing by 5.9 percent year-on-year.

This year, the market also looks likely to expand.

Asahi, in light of this trend, plans to increase its sales ratio of products with an alcohol content of 3.5 percent or less to all alcohol-related beverages for home consumption from about 6 percent in 2019 to 20 percent in 2025.

"We can develop attractive beverages even though they are low in alcohol," said Kazuo Matsuyama, who heads Asahi’s marketing division.

Drinks with an alcohol content of less than 1 percent are more profitable for beverage makers because they are not categorized as liquors under the Liquor Tax Law and are exempted from the liquor tax even though they are sold at the same prices as alcohol drinks.

But beverage makers are still required to prevent minors from drinking them because they contain a small amount of alcohol.

To ensure those beverages aren't easily accessible to minors, retailers and beverage makers post signs in liquor sales sections that minors are prohibited from purchasing them, and display the alcohol content on the cans and bottles of the items in big letters, according an Asahi representative.

The low-alcohol trend has also spread to Japan's wine industry.

Mercian Corp. on Aug. 31 released a wine called Bon Rouge that has an alcohol content of 6 percent.

Though a typical wine has an alcohol content of around 12 percent, Mercian created the lower alcohol content spirit to target drinkers who want to enjoy wine without getting drunk.

The wine is crafted using a technology to extract polyphenol to deliver a rich flavor even though it is low in alcohol, the company said.

(This article was written by Takumi Wakai and Kazumi Tako.)