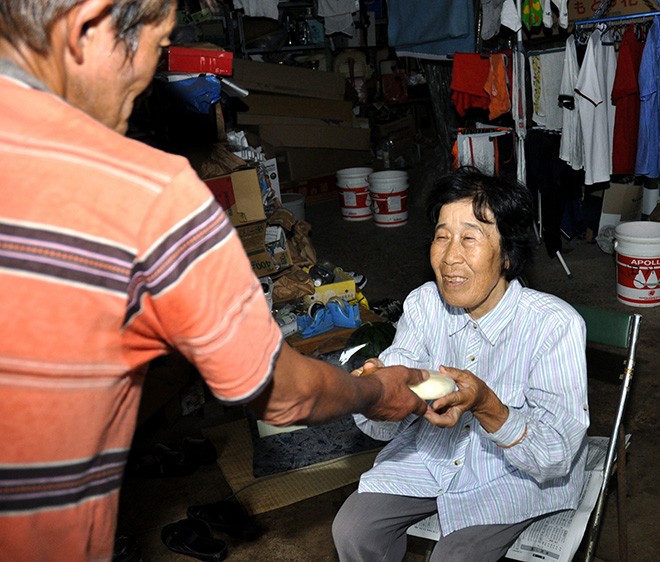 A resident receives a “manju” steamed bun in Nagasaki’s Sanzengochi district in 2012 in a tradition to keep the memories alive of a mudslide during the Edo Period. (Asahi Shimbun file photo)

What would you do to convey a deeply sad reality in front of your eyes to future generations?

How should people hand down lessons from painful experiences so that their children and grandchildren will not suffer from the same misfortune?

In July, I visited a community in Nagasaki’s Sanzengochi district, where a mudslide killed 33 residents during the Edo Period (1603-1867).

I heard people there have been holding an unusual event for more than 160 years to pass down the tragedy.

Around 30 families who live in the mountainous area give “manju” steamed buns to each other once every year. The tradition is designed to keep memories alive of the disaster by annually having residents recall why such an event is being held.

“A natural disaster hits all of a sudden,” said Tokumi Tagawa, 61, who heads the neighborhood community association. “We want to continue the event as long as possible lest we forget the dangers (of disasters).”

As I walked around, residents who received white manju pointed to a slope of a nearby mountain.

“The slope collapsed and houses were swept away in the Edo Period,” one of them said. “Everyone knows about it.”

Perhaps thanks to such keen awareness of the risk of a disaster, no community member was killed or injured during torrential rains in 1982, which caused river flooding and landslides that left 299 people dead or missing in Nagasaki.

Across Japan, people have carried on the memories of disasters through a variety of means.

In one community, tradition calls for the erection of a new monument every 50 years for the victims of a disaster. In another, the statue of Jizo, or the guardian deity of children, is placed to indicate the height of a past flood.

The nation suffered many natural disasters this summer. A typhoon also struck the archipelago on Sept. 18.

We all need to play our part to hand down wisdom about how to protect precious lives, reflecting on our ancestors’ wishes that transcend time.