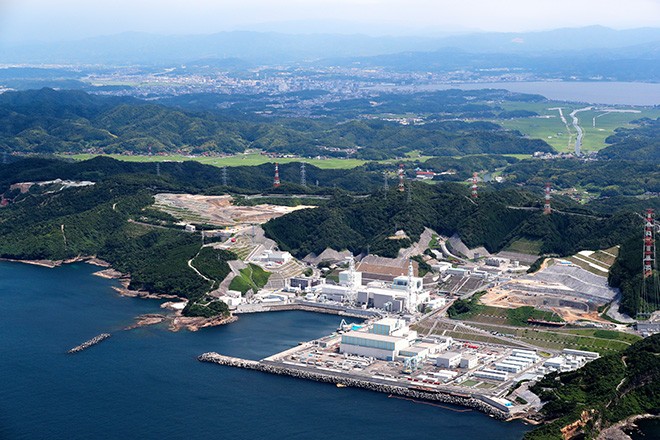 Chugoku Electric Power Co. is not allowed to restart the No. 2 reactor at its Shimane nuclear power plant without untangling deep-rooted concerns among local residents about a safe and orderly evacuation in the event of an accident.

The Nuclear Regulation Authority on Sept. 15 endorsed an inspection report certifying that the reactor meets stricter safety regulations that went into force after the Fukushima nuclear accident in 2011.

Now that the policy on safety measures for the reactor has been approved, whether it can be brought back online depends on the consent of the local governments involved.

Evacuation in an emergency is called the “last safeguard” to protect the safety of residents living around a nuclear plant.

The plant in question is situated in Matsue, the capital of Shimane Prefecture, making it the nation’s only nuclear plant located in a prefectural capital.

More than 450,000 people live within 30 kilometers of the plant, an area for which an emergency evacuation plan is required. The area also covers parts of neighboring Tottori Prefecture.

The evacuation plan for the plant, compiled through talks between the central and local governments, was approved in early September by the Nuclear Emergency Preparedness Commission, chaired by the prime minister.

The plan calls for a staggered evacuation to keep residents fleeing in vehicles from being stuck in gridlock. People within a 5-km radius of the plant will be the first to evacuate, followed by those in the rest of the 30-km zone.

Special assistance will be provided for people who need help, such as those in hospitals and welfare facilities as well as pregnant women. A majority of residents of Shimane Prefecture will evacuate to Okayama or Hiroshima prefectures under the plan.

But the viability of the plan has been called into question.

There are concerns that many residents will try to flee as quickly as possible regardless of their distance from the plant once an accident occurs. It is unclear whether sufficient support can be provided to the more than 50,000 people who would need special assistance. Okayama and Hiroshima prefectures are far from appropriately prepared to accept many evacuees.

Another challenge is securing evacuation routes if a nuclear accident occurs as an earthquake, heavy rain or torrential snow is hitting the region.

Officials of the central and local governments stress that the evacuation plan will continue to be improved through drills. The plan should not end up simply being pie in the sky.

The framework for talks between local governments, which represent residents, and the electric utility that operates a nuclear plant is also in question.

The 30-km zone around the Shimane plant encompasses Matsue, Izumo and two other cities in Shimane Prefecture as well as Yonago and Sakaiminato in Tottori Prefecture.

But only the Shimane prefectural government and the Matsue city government have the right to give advance consent to Chugoku Electric’s plan to restart a reactor at the plant.

The other local governments in the zone have been demanding the same right, but the utility has stuck to rejecting the demand.

At least the local governments in the 30-km zone should be allowed to be involved in the decision-making process regarding the plant. We urge Chugoku Electric to rethink its position.

Questions about the effectiveness of the evacuation plan also apply to other nuclear plants.

Lying at the heart of the problem is the fact that evacuation plans are developed by the central government, which has promoted nuclear power generation, and local governments that have agreed to host nuclear plants and are not subject to assessment by an independent organization.

In March, the Mito District Court in Ibaraki Prefecture ordered the suspension of the Tokai No. 2 nuclear power plant, citing the lack of a well-conceived evacuation plan.

Both the central and local governments should seriously heed the warning from the judiciary and make a fundamental review of the approach to emergency evacuation in the event of a nuclear accident.