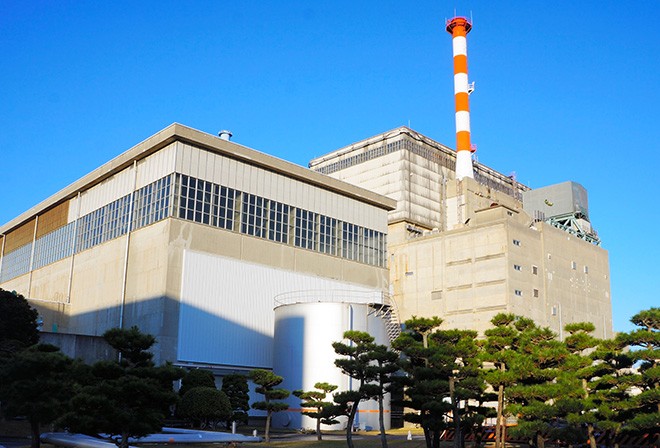 Decommissioning is at work at the Tokai nuclear plant in Tokai village, Ibaraki Prefecture, in 2015. (Asahi Shimbun file photo)

Japan plans to ease regulations to allow exports of large, disused equipment from nuclear power plants for overseas disposal as a way to reduce the mountains of radioactive waste accumulating at home.

The setup would mark a major shift from the government’s existing principle of disposing of all radioactive waste inside the country.

The industry ministry mentioned the revised disposal policy in the draft of the updated Basic Energy Plan, which awaits Cabinet approval in October at the earliest.

Even if the plan is approved, it will likely take some time for the government and nuclear plant operators to clear a slew of hurdles, such as estimating the costs of the project and ensuring the safety of shipments.

Although they are not highly contaminated, compared with nuclear debris generated by spent fuel, they must be disposed of and managed properly, including being buried deep in the ground for years.

The ministry is considering their export as an “exceptional measure” to deal with the grave issue of the radioactive waste accumulating at nuclear facilities across Japan.

“Export regulations will be reviewed to allow for export (of low-level radioactive waste) when certain conditions are met, such as their safe recycling into useful resources,” the draft for the latest version of the Basic Energy Plan said.

The industry ministry is soliciting public opinions on the outsourcing plan until Oct. 4.

Nuclear plant operators have decided to decommission 24 reactors, including the six units at the crippled Fukushima No. 1 nuclear plant.

Work to dismantle those reactors is expected to go into full gear starting in 2025.

Excluding the reactors at the Fukushima plant, the decommissioned units will produce an estimated 165,000 tons of low-level radioactive waste.

But more than 90 percent of that waste has nowhere to go for dismantling and disposal.

Japan still lacks a dedicated disposal site for equipment used at nuclear plants, forcing plant operators to store the waste at their facilities.

The ministry says the storage of the out-of-service equipment is getting in the way of the decommissioning process.

Experts say some businesses in the United States and Sweden clean, melt and recycle metal from radioactive waste sent by foreign countries.

“Japan should first learn the know-how of disposal by outsourcing the work to foreign businesses with a reliable track record in the area and eventually become capable of doing it at home,” said Koji Okamoto, a professor of nuclear engineering at the University of Tokyo.

But they can export the waste as exceptional cases if they obtain the consent of countries where business partners are based.

Utilities have pressed the government for a change in the disposal policy, and the industry ministry has been reviewing the existing setup alongside experts on nuclear technology.

Although the ministry intends to follow the principle of doing away with the waste within Japan, it plans to approve exports of the three types of nuclear plant equipment on condition that they will be recycled.

Ministry officials say the plan can be achieved through a revised ministry directive, without having to change the law.

The equipment intended for recycling overseas could include components kept at nuclear plants that still generate power.

But the ministry needs to work out many issues to turn the plan into reality.

Nuclear plant operators have the primary responsibility for disposing of low-level radioactive waste. And the actual costs these Japanese companies would have to pay to recyclers overseas is still unknown.

The bill could be far more expensive than initially estimated.

How to safely ship the radiation-contaminated equipment abroad is another unresolved issue.

The amount of nuclear waste in Japan has been growing since the 2011 Fukushima nuclear disaster. Utilities have gradually resumed operations at nuclear plants, but some have decided to decommission reactors, particularly aging ones, largely because of the costs needed to upgrade them under new safety standards.

For decades, Japan has been unable to secure a final disposal site for such waste inside the country, mainly because of opposition from residents of candidate sites.

(This story was written by Junichiro Nagasaki and Yu Fujinami.)