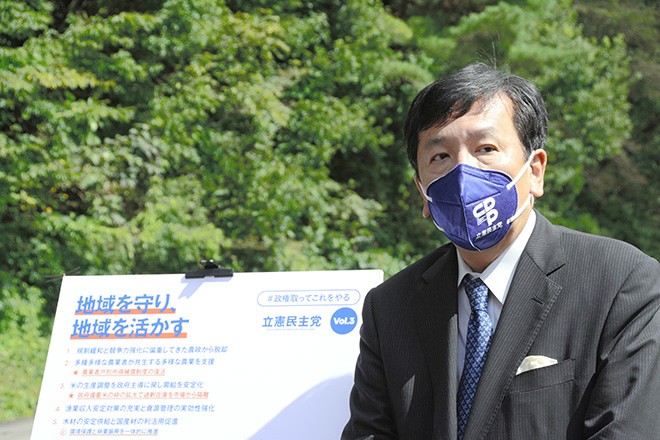 In its third election manifesto released on Sept. 19, the main opposition Constitutional Democratic Party of Japan (CDP) vows to focus on policies affecting local communities ahead of the Lower House election.

Yukio Edano, head of the CDP, promised the party will work on instituting a policy to stabilize the incomes of people working in the agriculture, forestry and fishery industry, if it wins control of the Lower House later this fall.

The ruling Liberal Democratic Party’s policy has emphasized “easing regulations and enhancing competitiveness” and the CDP will “turn it around,” Edano said during his visit to terraced paddy fields in Tokamachi, Niigata Prefecture, on Sept. 19.

The party’s newly released manifesto “will protect and utilize the community,” he said.

Edano also promised to restore the “individual income indemnity system,” which was introduced in fiscal 2010 as a major policy of the then ruling Democratic Party of Japan.

But it was abolished under the administration of Shinzo Abe, which sought to increase the competitiveness of farmers’ products.

The manifesto also includes a promise to stabilize the incomes of people working in the fishing industry.

“We will first work on rice, but we will widely expand our (efforts) to the primary sector,” he said.

The manifesto also promotes natural energy centering on local production and local consumption, as well as a containment policy to stop the population drain in rural areas.

Among other goals, building a 5G wireless communication environment and strengthening the function of public universities outside of Tokyo are also mentioned in the manifesto.

“We will protect people’s lives and livelihoods from the novel coronavirus,” Edano said during a stump speech in Abiko, Chiba Prefecture, on Sept. 20.