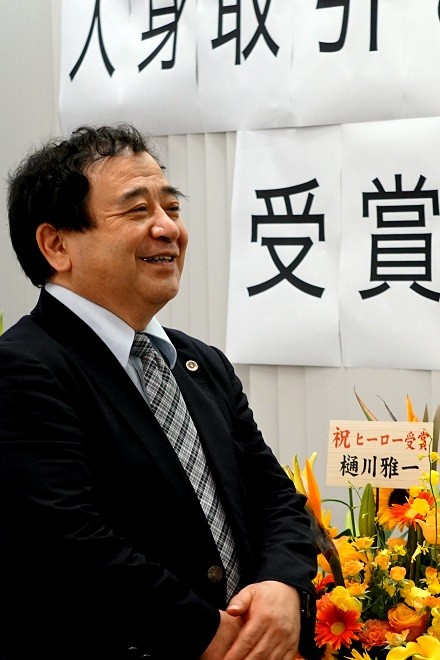 Shoichi Ibusuki was named a Trafficking in Persons Report Hero by the U.S. State Department. (Photo by Takehiko Sawaji)

Shoichi Ibusuki humbly calls himself “a labor movement activist wearing a lawyers’ pin,” but the U.S. government has gone further and labeled him a “hero.”

Ibusuki became the second Japanese named a Trafficking in Persons Report Hero by the U.S. State Department for his long battle protecting the rights of foreign technical trainees in Japan.

“Contradictions in the system have surfaced,” he said. “The technical training program should be abolished.”

His rise has been a long and bumpy ride.

Ibusuki, 60, took the national bar examination for the first time at age 27 and passed it on his 17th attempt after he turned 44.

His labor activities started during his college days when he was working part time at a convenience store.

He founded a union at his workplace, and then joined the activities of a larger labor union that represented workers at small and midsize companies.

When an attorney supporting the union fell ill due to overwork, the labor association, whose executive posts were filled with young college graduates, decided to nurture a young lawyer on its own.

He tried to refuse the offer because he wanted to “continue working as an activist throughout my life.”

However, a colleague told him that he “could pursue a career as a lawyer while remaining an activist.”

After receiving encouragement from his peers, Ibusuki studied for the bar exam between his labor activities.

Immediately after he was finally registered as a lawyer, he began handling cases involving foreign technical interns who had contacted the labor union.

He had seen small and midsize companies mistreat their employees, but the circumstances facing overseas trainees were far worse, “more like slave labor,” he said.

His many years of commitment to the issue were cited in the commendation by the State Department in July.

Ibusuki said he is still determined to bring an end to the framework of the trainee program.

The intern program is intended to provide skills that trainees can use after they return to their home countries. However, complaints are rife about employers forcing them to do menial or dangerous tasks under terrible working conditions.

The government has continued the program, saying it contributes to international society.

The trainees have also been essential for filling labor shortages in Japan’s agriculture, nursing and retail industries.