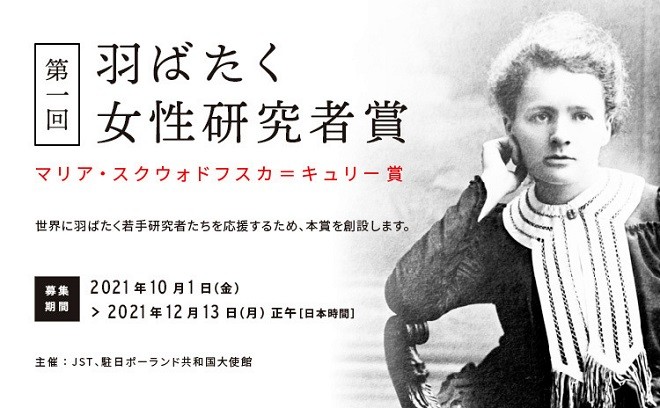 A new award to honor young female Japanese researchers as expectations are growing for them to play leading roles in science and technology on a global scale has been created.

The Japan Science and Technology Agency (JST) and the Polish Embassy announced on Sept. 17 that they founded the Marie Sklodowska Curie Award.

The award was established in tribute to Curie (1867-1934), a Polish-French physicist and chemist, who received the Nobel Prize twice, in physics in 1903, and in chemistry in 1911.

Those eligible for the award include researchers who obtained their Ph.D. around five years ago or later as of April 1, 2022, graduate students in the second half of their doctoral courses and other equivalent applicants.

Periods of time away from research due to maternity leave and other reasons will be taken into consideration.

Applications for the first installment will be accepted between Oct. 1 and Dec. 13 with or without recommendations from others.

Applications will be screened based on documents and interviews. Winners will be announced at the awards ceremony in May 2022.

The award was founded to provide further support for female researchers because they may have to deal with life events such as marriage and giving birth in their late 20s and early 30s at a time when it is important to nurture their research ideas.

caption: A flier for the Marie Sklodowska Curie Award (Provided by the Japan Science and Technology Agency)