VOX POPULI: How one man’s genius paved the way for more accessible spaces 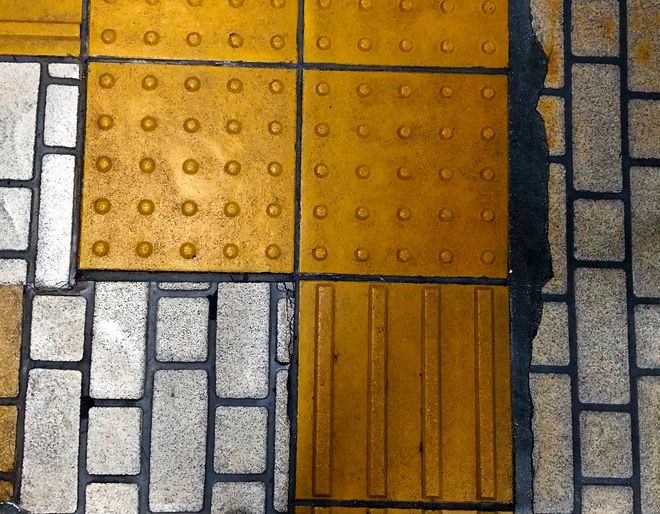 Tactile paving, a system of textured ground surface indicators that is indispensable to visually impaired pedestrians, is composed of what are called "tenji burokku" (Braille blocks) in Japanese.

A circle is a sign to stop while a line tells you to proceed.

The system was originally developed in Japan by Seiichi Miyake (1926-1982) and eventually spread around the world.

Miyake saw action overseas during World War II. After the war, he returned to his native Okayama Prefecture where he managed a ryokan Japanese-style hotel in the city of Okayama and became known as an engineer and inventor.

In 1964, when the nation's "traffic war" was growing serious, Miyake was shocked to witness a person with a white cane walk onto a busy road on which cars were dangerously speeding and where there was no pedestrian crossing.

While helping him, Miyake listened intently to what his friend could tell him about the sensations he felt with the soles of his feet and how he used his cane.

Miyake's Braille blocks were born from his flashes of genius as well as caring for his friend.

In 1967, he donated 230 blocks to a pedestrian crossing near a school for the blind.

But the road to practical application was filled with hurdles. Continuing to pump his private funds into developing prototypes, there were many days when he thought he might have to just give up.

According to Ritsuko Honma, 48, who specializes in the history of welfare, a campaign launched in 1970 by staff at a school for the blind in Osaka succeeded in getting Miyake's blocks installed on train station platforms.

"As more visually impaired people began getting around, demand for the system rose," noted Honma. "And the changing times also helped."

I recently walked across a pedestrian crossing in Okayama, the birthplace of the tactile paving system.

From a block embedded in a memorial plaque, I learned that the color of the original blocks was gray but was later changed to yellow to make them easier to see for people with weak or partial sight.

Since Miyake's death in 1982, his younger brother, Saburo, has continued to promote the system.

Sept. 20 marked the 20th anniversary of the standardization of the signage. However, some older blocks with non-standardized bumps and sizes still exist and await updating with standardized ones.