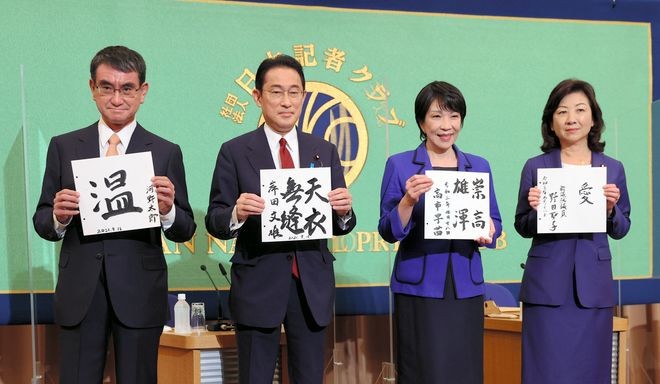 One key policy question in the ruling Liberal Democratic Party leadership race is how to protect Japan’s peace and security as the security landscape in East Asia is threatened by China’s military expansion and North Korea’s nuclear and missile programs.

The four candidates in the Sept. 29 election to choose the LDP’s new president and effectively Japan’s next prime minister should tackle the question with balanced approaches that are not narrowly focused on military capabilities to counter the security threats.

Diplomatic efforts such as international cooperation and direct dialogue should be given equal importance under Japan’s security strategy.

Sanae Takaichi, a former communications minister, has made it clear that she would seek further growth in Japan’s defense spending after seven consecutive years of record initial defense budgets.

Takaichi has also pledged to seek new legislation to allow Japan to have the capabilities of striking enemy bases, an idea promoted by former Prime Minister Shinzo Abe. But the pursuit of such military capabilities could deviate from Japan’s “senshu boei” security policy principle of exclusively self-defense and trigger an arms race in the region.

Fumio Kishida, a former foreign minister and LDP policy chief, has called this proposal “an option,” arguing such capabilities would help deter a second strike against Japan even if they cannot prevent the first attack. But it would be a tall order to identify the location where the first attack originated. It is open to question how realistic the proposal is.

All four politicians competing to succeed outgoing LDP president and Prime Minister Yoshihide Suga share the sense of threat over China’s rapid military buildup and its attempts to unilaterally change the status quo.

Kishida and Taro Kono, the minister of administrative reform who also served as foreign and defense minister in the past, have stressed the importance of cooperation with other countries that share such values as democracy, human rights and the rule of law with Japan.

Seiko Noda, executive acting secretary-general of the LDP, has said, “soft power is Japan’s forte,” referring to the ability to achieve foreign policy goals through efforts based on culture, values and diplomacy, rather than by force.

Japan should serve as a mediator to ease tensions between the United States and China by taking advantage of its close relationships with both countries, she has argued.

Kono has referred to the importance of human exchanges between Japan and China and proposed regular meetings between the Japanese and Chinese leaders. We are eager to see the LDP presidential hopefuls compete over comprehensive strategies to deal with China’s expansion anchored by bilateral dialogue.

We wonder why the four politicians are not trying to engage in discussions on specific ideas to improve Japan’s soured ties with South Korea.

Kishida, who was the foreign minister when the two governments struck an agreement on the issue of so-called “comfort women,” has said Japan has carried out its side of the deal concerning South Korean women forced to provide sex to Japanese soldiers before and during World War II.

“The ball is now in the South Korean court,” he said.

Kono, who succeeded Kishida as foreign minister, adopts the virtually same position on history-related bilateral issues. But there is a long list of challenges that require close cooperation between Tokyo and Seoul, including security threats posed by North Korea.

The next Japanese leader should make serious efforts to achieve a thaw in the frosty bilateral relationship instead of just waiting for South Korean action.

One of the policy topics that has yet to be discussed in depth in the LDP leadership race is the heavy U.S. military presence in Okinawa Prefecture.

The Abe and Suga administrations completely disregarded strong local opposition to the plan to build a new U.S. military base in the Henoko district of Nago, a city in Okinawa, to assume the functions of U.S. Marine Corps Air Station Futenma, which is located in Ginowan, also in the prefecture.

Local voters repeatedly expressed their opposition to the plan through elections and a prefectural referendum.

Meanwhile, there has been no end to crimes and pollution involving U.S. service members and bases. Confronting this issue head-on is a prerequisite for Japan’s efforts to develop an improved security policy.