Traffic snarled near greater Tokyo at end of 3-day weekend 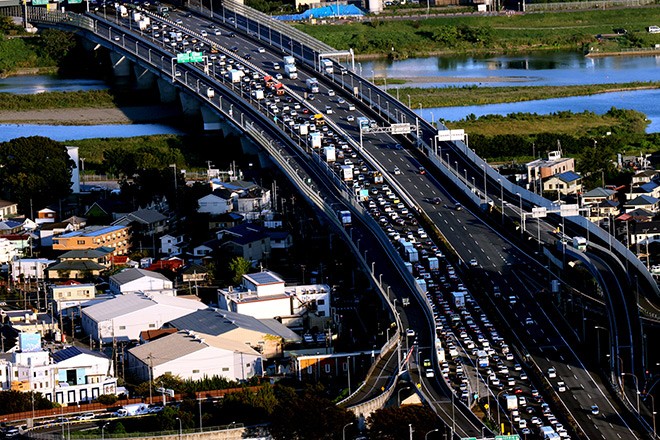 The lanes bound for Tokyo and surrounding areas are packed with cars returning from holiday destinations on the Tomei Expressway in Atsugi, Kanagawa Prefecture, on Sept. 20, the last day of the three-day weekend. (Tsubasa Setoguchi)

Despite Tokyo and many parts of the nation being under a COVID-19 state of emergency, expressways in the greater Tokyo metropolitan area were backed up on Sept. 20, the final day of a three-day weekend.

Heavy traffic congestion was reported, mainly in lanes bound for the capital and surrounding areas, according to the Japan Road Traffic Information Center.

The line on the Tomei Expressway, which links Tokyo and Komaki, Aichi Prefecture, snaked for about 44 kilometers from the Ayase Smart Interchange in Ayase, Kanagawa Prefecture, as of 8 p.m.

A roughly 31-kilometer chain formed on the lanes near the Kobotoke tunnel bordering Tokyo and Kanagawa Prefecture on the Chuo Expressway, which connects the capital and western Japan.

Foot traffic also increased during the three-day weekend despite an extended state of emergency still in place for Tokyo, Hokkaido and 17 prefectures.

Pedestrian traffic was up 12 percent on average from a week ago in the capital’s Shibuya, Shinjuku and Ginza districts around noon on Sept. 19, according to an estimate by NTT Docomo Inc. based on location data collected from mobile phones.

The data also indicated that many people headed to popular tourist spots outside of Tokyo.

The size of crowds was up 105 percent from a week earlier on Enoshima island in Kanagawa Prefecture, while it rose 12 percent in front of Hakone-Yumoto Station in the prefecture.