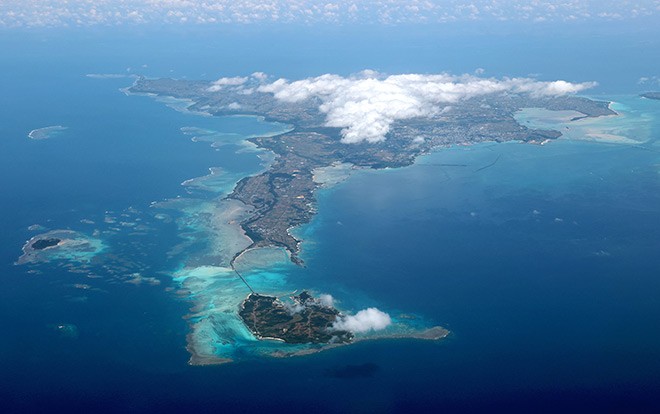 Despite their isolated locations, remote islands in Okinawa Prefecture have recorded some of the highest rates of novel coronavirus infections in Japan.

All it takes to spread the virus is one infected visitor. But it is difficult to halt traffic to the islands because residents are dependent on tourism revenue and daily products brought in by ship.

Adding to their woes is the limited number of medical care facilities.

The “explosive surge in infections” in August forced Kazuyuki Zakimi, mayor of Miyakojima city on a popular resort island of the same name, to make an emergency request to nonresidents.

“The island has become an infected area at the worst level in the world,” he said on Aug. 18. “My words may sound harsh, but please do not visit our island during the state of emergency.”

Around that time, “the fifth infection wave” was peaking across the nation.

Visiting tourists are believed to have spread the virus to residents on Miyakojima island, who then infected their family members.

Okinawa Prefecture had the worst rate of infections of all 47 prefectures.

The converted ratio for Miyakojima city over a week around that time was even worse: more than 400 infections per 100,000 people.

The number of new COVID-19 cases on the island with a population of about 55,000 exceeded 40 on some days.

At the end of August, the daily number had dropped below 10 following government requests for people to stay at home and take thorough anti-virus measures.

Zamami village covers about 20 islands, including Zamamijima located about 50 minutes from Naha city by high-speed vessel.

The village population is about 940, meaning the converted infection rate would be more than 1,000 per 100,000 people.

Clinics on the island suspended normal medical care to deal with the rise in COVID-19 patients. Passenger numbers on ships bringing supplies to the island were restricted to 30 to 50 percent of usual levels.

“I fully understood again the difficulties in responding to COVID-19 infections on the island,” a village official said.

But the number dropped to single digits for about 10 days because the city government promoted free PCR tests for people other than those who were in close contact with virus carriers.

It tried to swiftly locate virus carriers and isolate them as much as possible.

The city government is also asking tourists to provide proof of negative results of PCR tests taken within 72 hours before their landing on the island.

One municipal government official said the island had already been doing aggressive testing for COVID-19.

Over a week in early June, during the “fourth infection wave,” the city’s testing rate was nearly tenfold that of Tokyo, the official said.

“There are now no patients with serious symptoms, possibly because nearly 80 percent of the targeted population on the island is vaccinated,” said Koji Sakaida, head of the private Kariyushi Hospital and a medical adviser to the city.

“We will make the number of infection cases zero again and again even if the virus is brought in. We aim to build our society by balancing anti-virus measures with the economy,” Sakaida said.

(This article was written by Kana Yamada and Daizo Teramoto.)