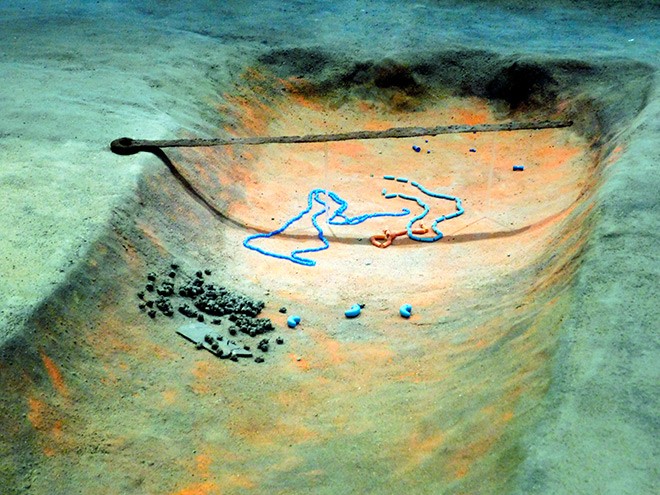 Researchers have concluded that glass beads excavated from the tomb of a king in Fukuoka Prefecture were likely brought to Japan through the ancient Silk Road trade route network.

A group of researchers, led by Tomomi Tamura of the Nara National Research Institute for Cultural Properties, reported the finding at an academic conference held online on Sept. 18.

The group analyzed an artifact made of two-layer blue glass beads, discovered from the Hirabaru ruins in Itoshima, Fukuoka Prefecture, in the 1960s.

The ruins are believed to be the former tomb of a king of Itokoku, a nation appearing in a Chinese history book known as “Gishiwajinden.”

Tamura said the beads found in Itoshima were “likely brought to East Asia through a trade route known as the ‘Steppe Route’ that connects Eurasia’s east and west and passes through Central Asia and the Mongolian plateau.”

During a research trip to Mongolia, Tamura noted a similarity in terms of colors and shapes between the beads and an artifact excavated from a tomb of the equestrian nomadic people known as the Kyodo.

While working on a joint project between the institute and the national museum of Kazakhstan, Tamura learned that the same glass beads had been excavated from ruins in Kazakhstan.

With help from the Itokoku History Museum in the city of Itoshima, which stores artifacts from the Hirabaru ruins, as well as research institutions in Mongolia and Kazakhstan, the researchers led by Tamura studied and X-rayed the glass beads.

They found that the beads were made of soda glass containing natron. They also contained antimony and manganese.

The researchers concluded they were likely all made in the same place.

Various glasses containing natron are believed to originate from the Mediterranean coast area, which would have been under the domain of the Roman Empire.

“Exchanges between the Han Dynasty in the East and the Roman Empire in the West were active in Eurasia in the same period as the Yayoi Period,” said Tadashi Nishitani, a professor emeritus at Kyushu University who specializes in archeology in East Asia. “Itokoku was one such center of international exchange and various products from abroad were likely brought there via the Korean Peninsula.”