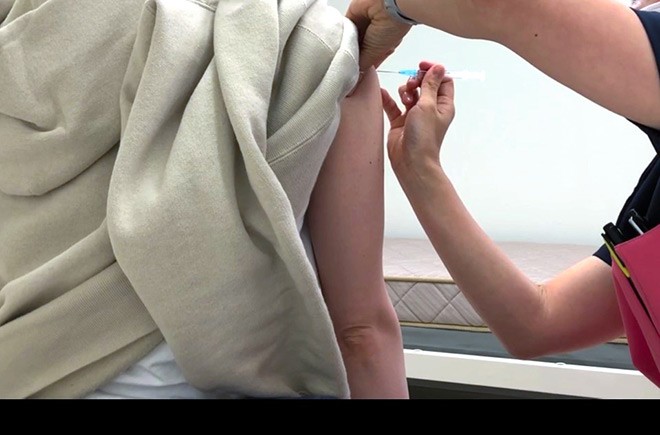 The health ministry will likely soon formally introduce a new clinical trial method that can speed up the development of Japan-made COVID-19 vaccines.

The ministry is set to reach a final agreement with other regulatory authorities overseas on the new clinical trial procedure to shore up the domestic vaccine industry, which is lagging far behind rivals in the United States and European countries.

Expectations are high for homegrown vaccines since they can help stabilize Japan’s vaccine supply, which currently relies largely on imports, and contain possible outbreaks of new novel coronavirus variants that emerge here.

The ministry has recently decided to allow fully vaccinated people to receive booster shots, which would require the government to secure more vaccine doses over the long term.

The government has been making frantic efforts to spur the development of Japan-made vaccines by discussing the matter at a meeting of relevant Cabinet ministers.

In clinical trials, pharmaceutical companies usually administer doses of a vaccine candidate to half the participants and shots of a placebo, such as saline solution, to the other half to compare an incident rate of a disease and other data on vaccine efficacy between the groups.

But the method poses an ethical problem in administering placebo jabs as COVID-19 vaccines developed by overseas companies have already been authorized for use. The rollout of those vaccines has progressed in Japan as well.

Drug companies, as a result, face difficulty in recruiting the tens of thousands of subjects required for the final stage of a clinical trial.

The ministry, in response, considered other methods without using a placebo to show that participants who received doses of a vaccine candidate are sufficiently immunized against COVID-19 when compared with recipients of existing vaccine shots.

The ministry is seeking to introduce a procedure that confirms the vaccine efficacy by comparing the amount of neutralizing antibodies, which are generated in recipients of COVID-19 vaccines and believed to be effective in preventing infections, instead of the incident rate.

The new method requires only several thousands of participants, thereby shortening the study period, according to the ministry.

But the procedure has never been adopted in clinical trials for COVID-19 vaccines, raising the need for Japan to gain a global consensus on the use of the method beforehand.

The ministry, therefore, has been discussing the matter with the International Coalition of Medicines Regulatory Authorities (ICMRA), which comprises the U.S. Food and Drug Administration and other regulatory bodies in about 30 countries and regions.

The ministry obtained approval from the ICMRA in June to conduct clinical trials using the procedure and is making final arrangements to determine which existing vaccines should be used for comparison and how to measure the quantity of neutralizing antibodies.

(This article was written by Kai Ichino and Kenta Noguchi.)