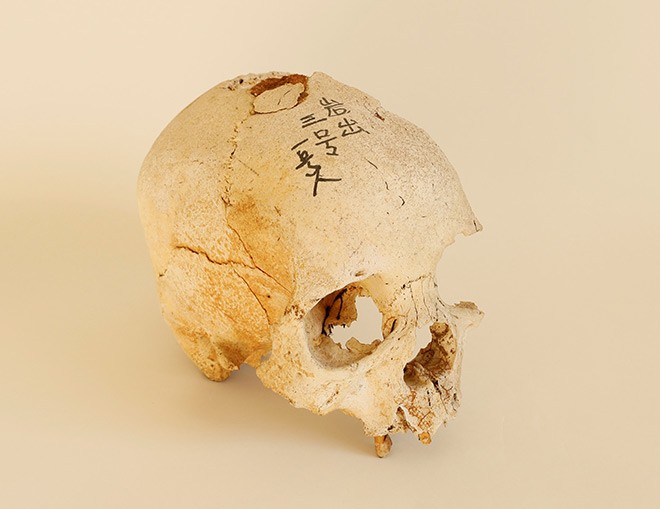 A skull excavated from the Iwade cave tombs in Kanazawa was analyzed in the latest study. (Provided by the Kanazawa city buried cultural properties center)

A new study suggests that modern Japanese have descended from three ancestral populations, including people in the Kofun Period between the third and seventh century.

According to current mainstream theory, Japanese have mixed origins in the Jomon people known for their distinctive pottery culture (c. 14500 B.C.-1000 B.C.) and the Yayoi people with their own pottery culture (1000 B.C.-A.D. 250).

However, a DNA analysis of human bones from about 1,500 years ago during the Kofun Period showed genetic characteristics unique to East Asians, which are found in present-day Japanese but not in prehistoric Jomon and Yayoi people, researchers said.

“This is the first evidence that Japanese have descended from three ancestral populations of Jomon, Yayoi and Kofun people,” said Takashi Gakuhari, an assistant professor of archaeological science at Kanazawa University’s Center for the Study of Ancient Civilizations and Cultural Resources.

An international team of researchers from Kanazawa University, Tottori University and other institutions published their findings in the U.S. journal Science Advances on Sept. 18.

According to the widely accepted “dual structure model” theory announced in 1991 by Kazuro Hanihara, who was a professor emeritus at the University of Tokyo at the time, modern Japanese have mixed origins in indigenous Jomon hunter-gatherers and succeeding Yayoi farmers.

The Jomon people inhabited across the Japanese archipelago, and they eventually became the Yayoi people after immigrant groups arrived from the Asian continent.

The research team analyzed DNA of 12 remains, including a Jomon person from about 9,000 years ago and a Kofun individual from about 1,500 years ago and compare the data with those from two Yayoi people whose DNA had been previously examined.

The researchers studied which one of the ancient populations was genetically close to modern Japanese based on traces of small differences caused by mutations when genetic information was passed from the parent to the child.

They confirmed that the Yayoi people had genetic characteristics commonly found in people in Northeast Asia, including areas along the Liao River in northeastern China, and that they admixed with the Jomon people.

Large-scale migrations from the continent date back to about 3,000 years ago during the Yayoi Period. The researchers said additional immigrant groups, such as Han Chinese, came to Japan, handing down textile, civil engineering and other technologies during the Kofun Period.

The researchers said they need to analyze more remains from the Kofun Period to confirm the new theory. The latest analysis covered bones of only three Kofun individuals excavated in Kanazawa.

“We want to close in on the mystery of the origins of Japanese by studying the genomes of other Kofun and Yayoi people,” Gakuhari said.