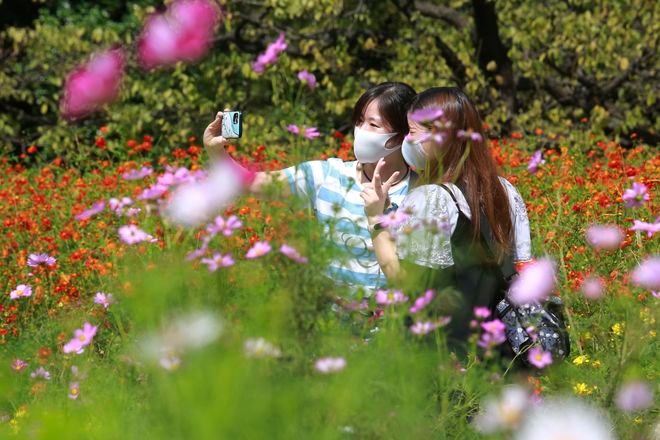 People wearing face masks to protect against the spread of the coronavirus enjoy a field of blooming cosmos flowers at Hamarikyu Gardens in Tokyo on Sept. 21. (AP Photo)

The number of new COVID-19 cases in Tokyo fell under 300 for the first time in about three months on Sept. 21.

Metropolitan government officials confirmed 253 fresh cases, the first time since June 21 when 236 cases were reported, that the daily tally was below 300.

There was also a huge decrease of 751 cases from the previous Tuesday, with Sept. 21 marking the 30th straight day the daily figure has been under that of the same day of the previous week.

For the week ending Sept. 21, the daily average of new cases was 663.9, which was 53.4 percent of the average of the previous week.

There were 152 COVID-19 patients with symptoms serious enough to require the use of a ventilator or other equipment to breathe. The figure was a decrease of 17 from the previous day. Metropolitan officials also said there were three deaths from COVID-19.