EDITORIAL: LDP candidates must disclose plans for funding their policies 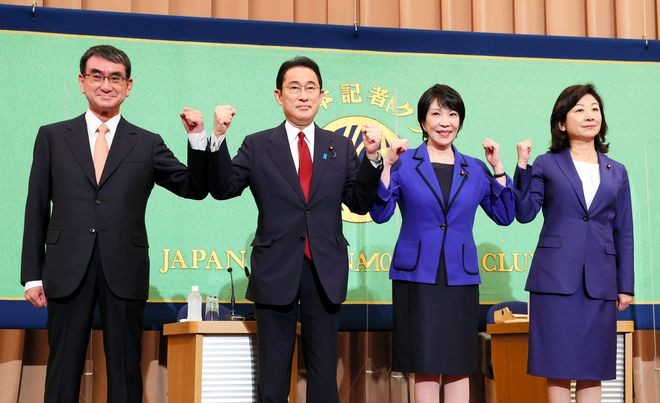 Financial stimulus would bring much-needed relief to people who are struggling to survive the COVID-19 pandemic.

But if it is nothing more than the promise of a lavish government spending plan made in consideration of an imminent Lower House election, we might as well just forget it.

For any stimulus program to be taken seriously, it must offer mid- to long-term fiscal management plans that are open to in-depth public debate.

One of the focal campaign issues in the current Liberal Democratic Party presidential race is the substance of the party's economic measures that will come under close scrutiny after the new president assumes office.

Where fiscal support for pandemic-hit businesses is concerned, all four candidates are practically on the same page.

But with respect to cash handouts to individual citizens, beneficiaries are limited only to needy households in the programs proposed by three of the candidates: Taro Kono, minister of administrative and regulatory reform; former party policy chief Fumio Kishida; and Sanae Takaichi, former internal affairs minister.

Only Seiko Noda, the party's executive acting secretary-general, calls for the payment of relief money to all workers.

While the pandemic restricts the activities of all citizens, the economic consequences they face vary according to their lines of business and working styles.

This reality ought to be borne in mind to ensure that whatever program they espouse will be acceptable to a wide cross-section of society.

The candidates are also striving to push their post-pandemic policies.

Corporate performances improved under the administration of former Prime Minister Shinzo Abe, but wage hikes have been limited, and many people say they have yet to feel financially comfortable. Perhaps in recognition of this sorry state of affairs, the candidates are notably arguing in favor of correcting income gaps and redistributing wealth.

Kishida is calling for improved wages for child care facility staffers and certified workers at nursing homes for the elderly, and paying housing and educational support to households with young children.

Takaichi is pushing the introduction of a tax relief system for low-income households that combines tax cuts and cash handouts.

Noda is setting countermeasures against the low birthrate and aging of the population as the pillar of her economic growth policy, and proposing ambitious investments in children.

Takaichi, who is vowing to further develop Abe's Abenomics economic policy, is eager to spend money in other areas as well, such as "a total of about 100 trillion yen ($914.33 billion) over 10 years" on disaster countermeasures and other measures to strengthen the nation.

The problem with all the four candidates is that none has really talked about how they intend to secure the funding necessary to implement their policies.

Where the costs of pandemic response are concerned, relying on debts for the time being cannot be helped.

But with any policy that will obviously continue after the pandemic is over, it is crucial that the discussion include the funding source.

Amid the pandemic, moves are growing conspicuous in the United States and some European nations to raise taxes to balance the budget. For Japan, whose financial state is considered the worst in the developed world, letting its public debt snowball is irresponsible in the extreme for the next generation.

Using the national budget is so easy, anyone can do it. But the true worth of a politician lies in their ability to discuss policies that demand painful sacrifices from the public.

And that is the responsibility none of the four candidates should be allowed to escape.