VOX POPULI: Wearing a mask is not cowardice, it’s what civilized people need to do 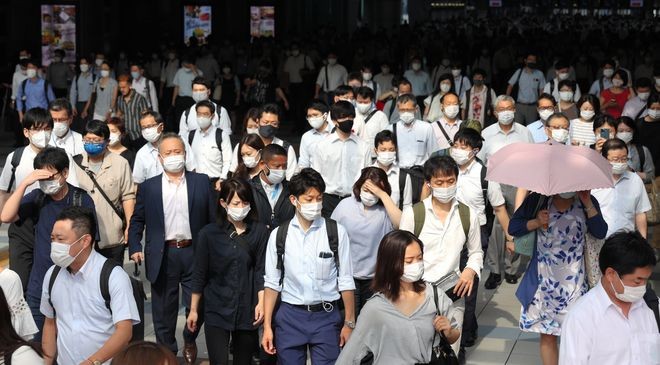 Almost all pedestrians wear face masks in Tokyo's Minato Ward on July 12 when the COVID-19 state of emergency was put in place in Tokyo for the fourth time. (Asahi Shimbun file photo)

These days, nobody goes maskless when meeting someone face to face.

With only the eyes and the brows showing above the mask, you never get to see the other person's face in full even when speaking at close quarters, and this is increasingly making me feel oddly fatigued.

Cognizant of how face masks can impede nonverbal communication and mutual understanding, Minami-Ashigara City Hall in Kanagawa Prefecture is currently trying out a new resident service system, introduced last summer, that requires staffers to show their maskless facial photos next to their name tags when interacting with residents.

The public's reactions are generally favorable, such as this makes it easier to talk to the officials, or that a facial photo offers a clue as to the personality of the official.

But the system is apparently a mixed bag for some officials.

"Visitors invariably stare at my picture right at the start, and that makes me feel embarrassed," said one. "It's rather awkward to remind someone to pay their taxes when I'm all smiles in my picture," noted another.

"This system is nothing more than a measure to supplement the masking policy that covers the mouth, and I advise the officials in certain departments to remove their photos when they serve residents who come for advice on serious matters," explained Minami-Ashigara Mayor Shuhei Kato, 72.

"I'm smiling behind my mask" is the slogan of this system proposed by a corporation with close ties to the city. And it also has been adopted by the city's "Michi no eki" (Government-designated roadside rest area).

After the pandemic has been brought under control and most people have shed their masks, the protagonist has to keep wearing a mask because of his chronic heart condition, even though he wishes he didn't have to.

In a memorable scene, he controls his feelings and tries to convince himself: "My absolute determination to avoid every risk of infection is not an act of cowardice, but one of courage as a civilized human being."

On Sept. 21, new COVID-19 cases in Tokyo fell below 300 for the first time in three months. But we must not let our guards down yet. We should remain masked for a while and carry photos of our smiling faces if necessary.