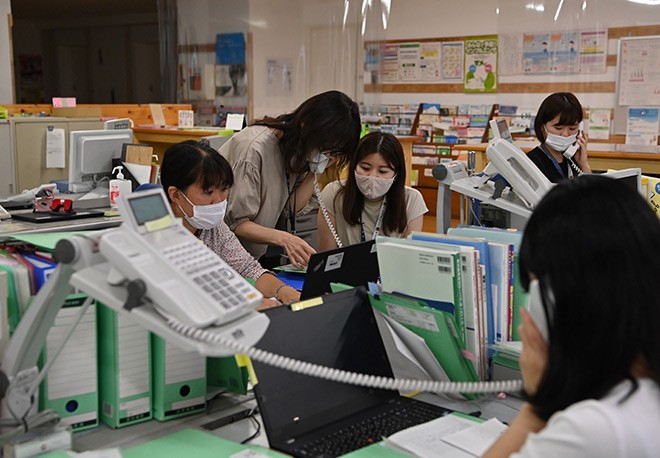 More than half of the COVID-19 patients who died while recuperating at home in Tokyo since August were 59 or younger, according to a metropolitan government survey.

The survey found that 44 at-home patients have died since August, when the fifth wave of infections hit the capital.

The number was a staggering eight times more than the at-home deaths of those in the same age group during the period from January to March, when the infection’s third wave struck Tokyo.

A doctor who visits the homes of COVID-19 patients said young people are likely to develop severe symptoms when they have risk factors such as obesity and diabetes.

According to the metropolitan government, 90 at-home patients have died since December 2020.

As of Sept. 20, 44 deaths were confirmed between August and September this year.

The number was 41 for the period from January to March, when many senior citizens died of the infectious disease.

During the fifth wave, it is notable that relatively younger people have died.

There were only three deaths among those 59 or younger in the period from January to March. More than 90 percent of the deaths in the period were people 60 or older.

The number of patients rapidly increased from late July in Tokyo. Shortages of hospital beds have prevented people with moderate symptoms or worse from being admitted to a hospital to receive proper care.

In late August, more than 25,000 patients were recuperating at home. The number has decreased to about 4,000, as the number of infections has dropped.

But at-home patients, one after another, have died after their condition suddenly deteriorated.

These included a case in which a woman in her 40s who did not have a pre-existing condition died.

Staff of Yushokai started visiting at-home patients on Aug. 11 and saw 402 patients within about a month.

Of these, 66 percent developed moderate symptoms or worse. One of these patients died after the Yushokai staff made a visit.

Sasaki said young people tend to be unaware if they have a pre-existing condition because they do not often go to a hospital.

He said the staff found that a patient had diabetes even though a public health center said the patient did not have a pre-existing condition.

It is difficult for at-home patients to be aware when their symptoms are worsening, Sasaki said.

Some patients may not notice any symptoms at all when their blood oxygen saturation level slowly decreases.

Sasaki said there was a patient who was playing a game on a smartphone even while experiencing an abnormal blood oxygen level.

Sasaki suggests at-home patients monitor their blood oxygen level and ask for help if it drops below 93 percent.

He said Yushokai saved some lives of at-home patients by prescribing medicines and providing oxygen.

But he urges officials to make transitional facilities available, in between homes and hospitals, where patients can stay and receive medical care.

Gathering patients at one location will be easier for health care workers to monitor them and provide a safer environment for recuperation, Sasaki said.