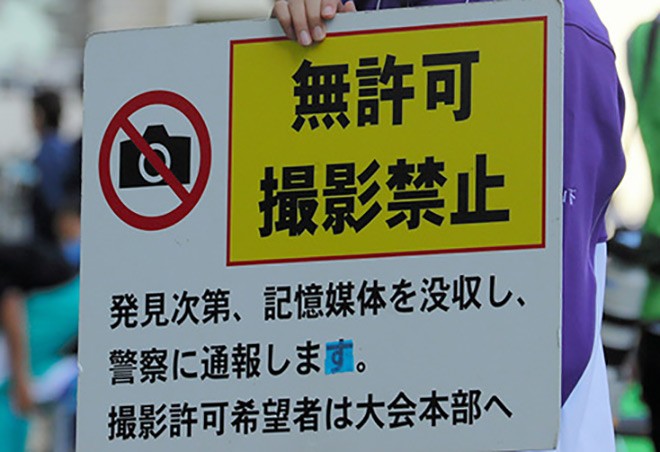 An admitted pervert was caught taking secret photos of a woman’s behind in Tokyo, but he was let off the hook by police because she was wearing pants.

The man’s act does not constitute voyeurism, which is punishable under local ordinances, unless he shot an upskirt photo of her underwear or body, according to police.

Such narrow definitions of camera voyeurism have often driven victims into a powerless situation and law enforcement officers into resorting to alternative means to bring voyeurs to justice.

In mid-March, a woman rushed into a police box in Tokyo.

She told an officer stationed there that a male stranger secretly took photos of her backside with a smartphone on a nearby street.

The man, when questioned by the officer, admitted taking the photos.

Police found still photos of the woman’s hip area in the man’s phone, and a number of similar snapshots he said he secretly took of other women.

“I love the bums of women wearing pants,” the man told police.

But the Metropolitan Police Department let the man go home, despite the pleas from the woman to investigate the case, concluding that his act did not meet the definition of camera voyeurism. Police did not pursue the case because the woman was wearing pants.

But the ordinances define the subject prohibited from being photographed as “underwear or a body hidden under clothes,” in principle.

No prohibitions are in effect against taking photos of someone’s rear-end if it is covered by clothing, leaving the man's fetish exempt from penalties.

A senior official of the Metropolitan Police Department who handled the woman’s case said, “I understand her feelings. But I have no choice (but to release him) as long as it is not illegal.”

There was, however, at least a case in which a voyeur was caught photographing the behind of a woman wearing pants and did not escape legal punishment for doing so.

The local government ordinances also have a clause to restrict obscene language and behavior, and authorities applied it to the case.

The Supreme Court in November 2008 found that a man who snapped photos of the rear end of a woman who was wearing skinny pants guilty and ruled that he had engaged in obscene conduct.

The man followed the woman for about five minutes, for about 40 meters, in a Hokkaido shopping mall.

Then from about 1 to 3 meters behind her, he secretly photographed her rear end 11 times.

The highest court concluded that these acts fell under the category of obscene conduct.

“Even though (photos) were taken of someone wearing pants, the man’s behavior is, in the common sense, vulgar and indecent, and clearly against the notion of sexual morality,” the court said in its ruling.

Still, one of the judges voiced a dissenting opinion, arguing that what the man did to the woman could not be considered a behavior that “causes a sense of shame and provokes anxiety in a significant way.”

Most recently, in September this year, Kyoto prefectural police sent the case of a man who took photos of a female athlete at a track and field event to the prosecutors' office.

Police found that the man took 34 snapshots focusing on the athlete’s buttocks.

Though the athlete’s rear end was concealed under a uniform in the photos, police concluded the man’s behavior was relentless and fell under the definition of “obscene acts” defined by a prefectural ordinance.

But in the case of the woman who fell victim to secretly being photographed in Tokyo, metropolitan police said they did not find such “relentlessness” in the perpetrator’s behavior.

As countless websites exist on the internet consisting of collections of photos secretly snapped of women on the streets, anybody can be victimized at any moment.

The snapshots often focus on the faces, buttocks and breasts of women who are fully clothed.

A woman in her 30s who lives in Tokyo said she noticed an unacquainted man taking a photo of her face while she was at work.

She immediately asked the man to delete it, but she still has an uncomfortable feeling about the incident.

“I still shudder at the memory,” she said. “The photo could have been used for some horrible purpose.”

Hisashi Sonoda, a professor emeritus of criminal law at Konan University, however, cautioned that a broad interpretation of “obscene language and behavior” may result in limiting civic activities.

Thus, police action based on an obscenity clause “should be conducted in a careful manner,” he said.

“As seen in the Supreme Court’s decision, there has to be an added component, such as objectively measured relentlessness,” he said.

(This article was written by Eishi Kado and Ryo Oyama.)