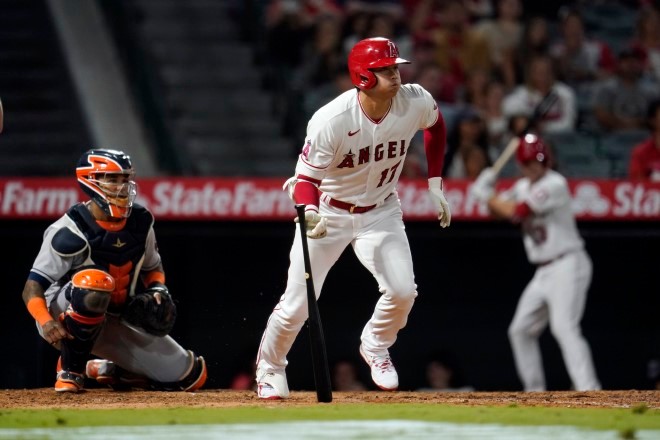 Los Angeles Angels’ Shohei Ohtani follows through on a single during the sixth inning of a baseball game against the Houston Astros, Sept. 21, in Anaheim, Calif. (AP Photo)

ANAHEIM, Calif-- Shohei Ohtani hit his 45th homer in the eighth inning, but Aledmys Díaz and Kyle Tucker hit back-to-back homers and drove in three runs apiece while leading the Houston Astros to a 10-5 victory over the Los Angeles Angels on Tuesday night.

Ohtani connected for his first homer since Sept. 10, driving a solo shot off Houston’s Cristian Javier 445 feet into the elevated right field stands at the Big A. The two-way superstar has only three homers in September, but he is just one behind Toronto’s Vladimir Guerrero Jr. and Kansas City’s Salvador Perez for the major league lead.

With a 116.1 mph exit velocity that resembled his early-season feats, Ohtani also matched Mike Trout’s 45 homers in 2019 for the second-most in Angels history. Troy Glaus hit 47 in 2000.

Jose Altuve hit a two-run homer and Martin Maldonado added a solo shot in another blowout victory at the Big A for the Astros, who routed the Angels 10-0 on Monday. Houston built a 10-1 lead in the sixth inning of the rematch before coasting to its 12th win in 17 meetings with Los Angeles this season.

Phil Gosselin hit a three-run homer and Jack Mayfield had a solo shot for the Angels, who have lost five straight while wrapping up their seventh straight non-playoff season. The Halos had their second consecutive embarrassing pitching performance against the division leaders, giving up 18 runs in an eight-inning stretch spanning the first two games of this four-game series.

Houston got four hits and four runs off Angels starter Packy Naughton (0-3), who pitched into the fifth inning of his fourth career start.

Tucker hit a two-run homer and Díaz followed with a solo shot off Naughton in the second for the Astros’ 10th back-to-back homers of the season.

Mayfield, the former Astros middle infielder who has got his first regular big-league action this season with Los Angeles, hit his career-best 10th homer of the season on Urquidy’s first pitch of the second.

But Altuve connected in the fifth for his 29th homer of the season, and Díaz contributed a two-run single. Maldonado added a solo shot during Houston’s three-run sixth for his second homer in two nights at his former home stadium.

Ohtani singled and scored in the sixth when Gosselin chased Urquidy with a three-run homer.