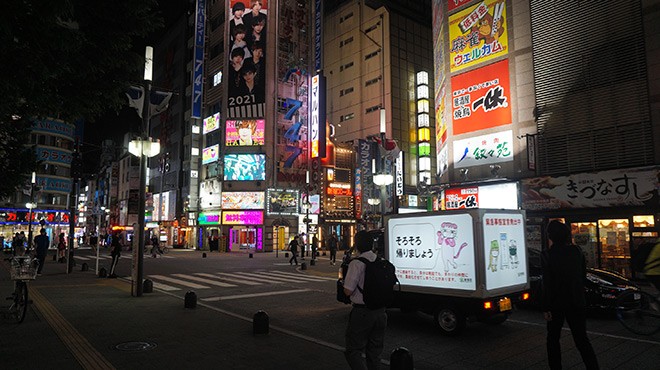 Messages from a van urge pedestrians in Tokyo’s Kabukicho entertainment district to go home as a precaution against the novel coronavirus on Sept. 15. (The Asahi Shimbun)

The average overall price of land in Japan declined for the second straight year, as the COVID-19 pandemic continued to take a toll on urban centers, particularly the Osaka area, government data showed.

The average price for commercial, residential and industrial land fell 0.4 percent this year from last year, a slight improvement from the 0.6-percent drop in 2020, according to a land ministry report released on Sept. 21.

The ministry’s figures are based on prices as of July 1 and serve as the basis for commercial real estate transactions.

The average price of commercial property fell 0.5 percent year on year in 2021, following a decline of 0.3 percent last year.

Commercial areas in the three urban centers of Tokyo, Osaka and Nagoya have been hit hard by repeated COVID-19 states of emergency, which have forced many bars and restaurants to close for good and dampened prospects for a rebound in the foreign tourist numbers.

Commercial properties fell 0.6 percent in value in the Osaka area this year, the first decline in nine years. Last year, commercial land prices were up 1.2 percent in the region.

The Tokyo area’s commercial land prices inched up 0.1 percent this year, well below the pace of 1.0 percent last year.

The service industry has also been affected by anti-virus measures in the Nagoya area, but commercial properties rose 1.0 percent in value in the region this year, compared with a 1.1-percent decline last year.

The increase was attributed partly to a redevelopment project in central Nagoya that prompted businesses to build more office buildings and hotels near the area.

The Meidi-ya Ginza commercial building in Tokyo’s Ginza district remained the most valuable real estate in Japan, with a price of 39.5 million yen ($360,820) per square meter this year.

But the price fell 3.7 percent from 2020, dipping below 40 million yen for the first time in four years.

For residential properties, the average price dropped 0.5 percent this year, following a decline of 0.7 percent in 2020.

The prices increased or their declines narrowed from last year in 34 prefectures, with Tokyo, Hokkaido, Miyagi and four other prefectures reporting year-on-year rises.

An extension of a tax break on mortgages contributed to strong sales of luxury apartments in city centers. The spread of teleworking to reduce the risk of infections also encouraged more people to buy houses.

The average price of industrial property rose 0.8 percent this year.

Construction of distribution warehouses accelerated to deal with the surge in online shopping amid the pandemic. Land prices shot up near expressway interchanges and other places convenient for shipping.