VOX POPULI: The other 99% of the population watching LDP race closely 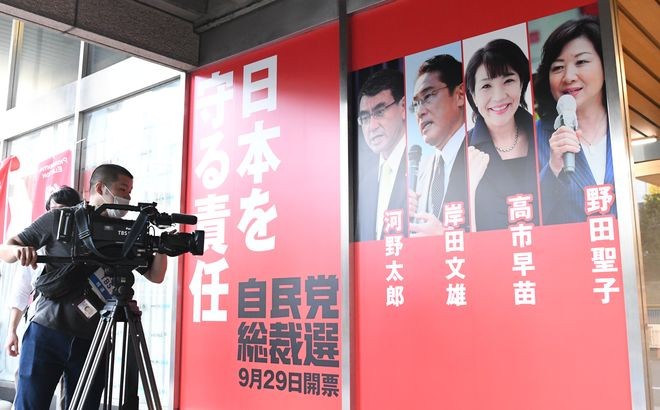 A poster of candidates in the Liberal Democratic Party presidential race at the LDP headquarters in Tokyo on Sept. 22 (Takuya Isayama)

Mail balloting is under way for the Liberal Democratic Party's rank-and-file members and supporters ahead of LDP members of the Diet in the party's presidential race.

A total of 1.1 million voters nationwide will play an important role in the election.

A longtime acquaintance, an aide to an LDP lawmaker, told me, "In our office, we are now working the phone bank in top gear."

All day long, staff members go through lists of party members and supporters, appealing to them to vote for the candidate backed by "habatsu" faction heavyweights.

A party member in his 70s voted yesterday. "I received a postcard from my local Diet member, so my wife and I voted for the candidate this lawmaker is campaigning for."

I can visualize a mammoth voting machine working at full throttle.

Since this is an election to decide the leader of the nation's ruling party, I must confess I became engrossed in sizing up the candidates.

But I immediately came to my senses, reminding myself that I am only a bystander.

In fact, I have lately received many letters and phone calls from readers of this column, complaining about excessive media hype over this election and insufficient coverage of opposition party policies.

According to a survey conducted by The Asahi Shimbun six years ago, more than 60 percent of the members consisted of agriculture, forestry and fisheries workers, independent business operators and others, including unemployed people.

This hardly represents a mirror that reflects the will of the nation as a whole.

Even though this will never be realized due to constitutional reasons, the present political climate is such that I cannot help being attracted to the prospect of the Japanese people being allowed to elect their own prime minister by direct vote.

Starting today, the LDP is hosting four-day town hall meetings. Only 1 percent of the population is eligible to vote in this election.

But the other 99 percent, including myself, will be watching very closely with the next Lower House election in mind.