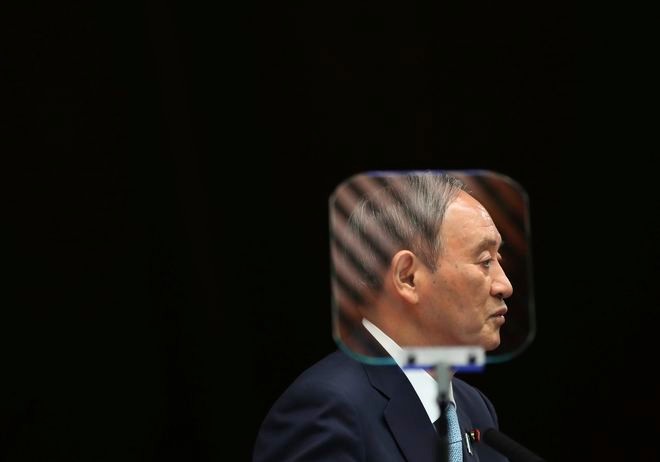 Prime Minister Yoshihide Suga is seen through a teleprompter as he speaks during his news conference at the prime minister's office in Tokyo on Sept. 9. (Pool Photo via AP)

Dealing with the still-raging COVID-19 pandemic will undoubtedly be one of the top policy priorities for the next leader of the ruling Liberal Democratic Party, who will succeed outgoing Prime Minister Yoshihide Suga.

But the four candidates running in the LDP presidential race have not spent enough time discussing key issues related to this crucial policy challenge.

Debate on the challenge should focus on what the main factors are behind the Suga administration’s botched handling of the health crisis and why public support for his Cabinet waned. These questions are at the heart of the failed political leadership that forced Suga to give up seeking re-election in the party poll, to be held on Sept. 29.

But these questions also have a bearing on the responsibility of the four candidates, who were all, as Cabinet members or as LDP heavyweights, in positions to support Suga and give candid advice to him when necessary.

When asked about what Suga failed to offer or do in a Sept. 18 debate hosted by the Japan National Press Club, the four candidates cited “meticulous explanations” about his policies and “preparing for the worst.”

But the tactless way Suga communicated his policies to the public was not the only, or even the principal, problem with his leadership. Many of his policies were fraught with mistakes due to his self-righteousness.

His refusal to admit these mistakes, coupled with his obstinate adherence to his policy decisions, caused his administration to become divorced from public opinion. The politicians aspiring to succeed Suga should point out these facts and show a willingness to learn from Suga’s mistakes.

In a Sept. 9 news conference where he announced his resignation, Suga discussed factors that hampered his administration’s responses to the pandemic.

He cited difficulty in securing additional hospital beds for COVID-19 patients and health care workers to take on the heavy burden of dealing with the crisis, the highly compartmentalized structure of bureaucracy and the wall of jurisdiction between the central and local governments.

But all these problems were clearly perceived before Suga became the leader. After he took office, however, he made no serious effort to tackle these problems. Instead, he vigorously promoted the “Go To” subsidies programs to support the battered hospitality industries, launched by his predecessor, Shinzo Abe.

It is still fresh in our minds how Suga continued this reckless policy campaign in the face of warnings from experts. That initiative led to a fresh wave of infections that forced the government to declare a second state of emergency for Tokyo and other parts of the nation.

A state of emergency has been in place for various areas for most of the time since then. This is far from the picture Suga painted when he promised to ensure effective responses to the pandemic without seriously undermining social and economic activities.

Every country has gone through a rocky process of trials and errors in responding to the pandemic. Political leaders around the world have behaved in widely different manners in dealing with the crisis.

Some have candidly admitted the mistakes they made and engaged in dialogue with the public to use the lessons learned to take better actions, while others have refused to offer detailed explanations about such mistakes and focused instead on justifying their decisions.

Suga was a typical example of the latter.

In mid-June, for example, Suga boasted progress in his government’s vaccination campaign and predicted that the number of seriously ill COVID-19 patients, especially those among elderly people, would sharply decline by the Tokyo Olympics. As a result, the burden on the health care system would be sharply reduced, he said.

But the nation was soon hit by a fifth wave of infections, with the number of serious cases breaking records almost every day. Many patients died at home as there were no hospital beds available for them.

Why did he get it wrong in predicting the trend? What kind of errors did he make and what should be done to prevent them in the future?

Suga has yet to offer any answer to all these legitimate questions. He adopted expert opinions only when they were to his liking and, after making a series of inconsistent policy decisions, found himself hard-pressed to maintain the momentum of his leadership.

Suga’s political tumble is reminiscent of Abe’s struggles before his resignation about a year ago.

No matter who succeeds Suga, his successor will need to be willing to pay attention even to dissenting voices for humble discussions on policy issues and take the responsibility squarely for the decisions he or she makes.

Without this attitude, the new leader will be unable to secure successful responses to the pandemic. This is the moral of the failed COVID-19 policies of the past two administrations.