Kofukuji's 5-story pagoda in Nara to open to public from Oct. 9 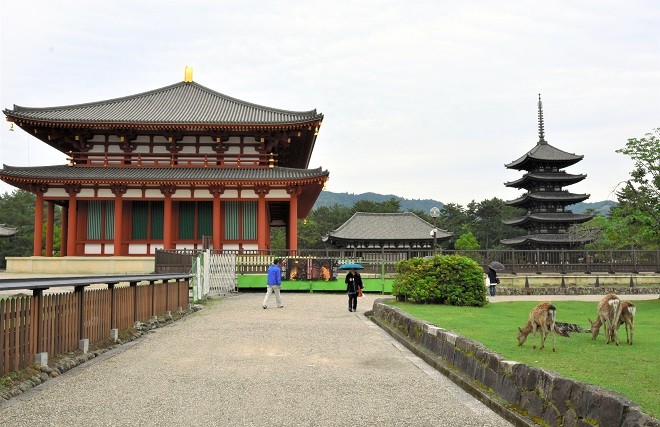 Kofukuji temple's five-story pagoda, which has national treasure status, will be open to the public from Oct. 9. Photo taken on May 28 in Nara (Takumi Okada)

NARA--Kofukuji temple, a UNESCO World Heritage site here, will offer a rare chance for the public to view the interior of its five-story pagoda.

Although the interior is usually closed to the public, the doors to the first story will be opened to reveal the central column and Buddhist statues enshrined inside.

Later next year, the temple, which has national treasure status, will undergo a comprehensive renovation, its first since 1900. The entire structure will be covered with a protective scaffolding while the work is carried out.

The pagoda was erected during the Nara Period (710-784) at the encouragement of Empress Komyo, the wife of Emperor Shomu. It has been destroyed by fire on five occasions but rebuilt each time.

Kofukuji joined hands with Hakkaisan Brewery Co. in Minami-Uonuma, Niigata Prefecture, to produce a special sake to mark the occasion.

The sake was brewed in January with production limited to 2,000 bottles (about 720 milliliters per bottle) of nihonshu yongo. It was aged from late February to late September in a "yukimuro" snow cellar filled with about 1,000 tons of snow on the company's premises.

"The sake undergoes less stress than when it is refrigerated, which accounts for its mellow flavor," said Tsutomu Tanaka, 59, the "toji" head brewer.

Eishun Moriya, 71, chief abbot of Kofukuji, visited the yukimuro in March. He named the sake Konoma, which means between trees, the following month and wrote the name in bold brushstrokes, which are featured on the label.

Admission is 1,000 yen ($9) for adults and college students, 600 yen for junior and senior high school students and 400 yen for elementary school pupils. The price includes an amulet as a lucky charm.

The Konoma sake will be sold at the temple's National Treasure Hall.