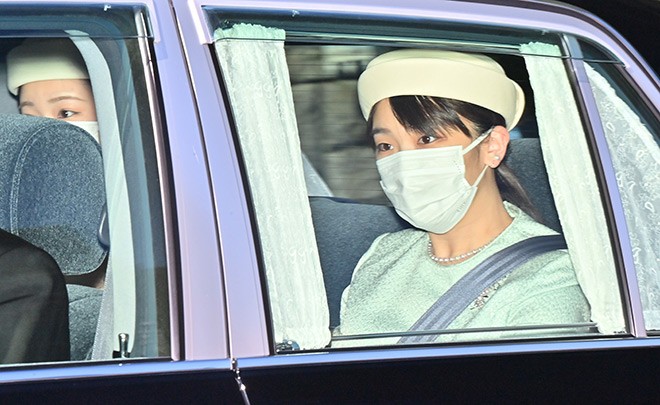 Princess Mako leaves the Akasaka Estate on Sept. 23 along with her sister, Princess Kako, left, to attend ceremonies at the Imperial Palace. (Hiroyuki Yamamoto)

Princess Mako attended what likely was her last formal event as a member of the imperial family on Sept. 23 when she took part in an annual ceremony held on the Autumn equinox.

The development stemmed from her decision to forego the ceremonial events usually associated with the marriage of an imperial family member when she weds longtime lawyer boyfriend Kei Komuro and moves to New York.

The ceremony was also attended by Emperor Naruhito and other family members to pay homage to ancestors and express their appreciation to deities.

Komuro, meantime, plans to return to Japan on the evening of Sept. 27 and hold a joint news conference with Mako after his 14-day quarantine period comes to an end.

On Sept. 23, Mako and her younger sister, Princess Kako, were driven from their parents' Akasaka Estate residence to the Imperial Palace. Mako bowed to bystanders waiting outside the Tokyo residence. This is the first time since July 2020 that Mako has left the Akasaka Estate to take part in a scheduled event announced beforehand.

Mako and Komuro announced their intention to marry in September 2017.

But the Imperial Household Agency announced a postponement of their marriage the following February after financial difficulties involving his mother came to light.

The couple intend to marry this autumn and move to New York where Komuro has been attending law school. Once she weds, Mako will lose her status as an imperial family member.