Letter from late son delivered to family decade after he drowned 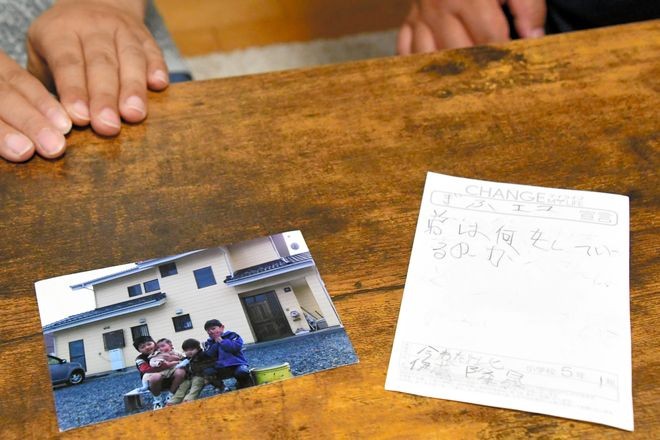 A letter from the first son of Hideo Ito, Ryusei, which asks “what my younger brothers are doing,” and a photo dating from 10 years ago of his four sons, are shown on Aug. 13 in Kani, Gifu Prefecture. (Shino Matsuyama)

KANI, Gifu Prefecture--When the postman delivered a letter sent by registered mail to Hideo Ito at his home here in early August, he was asked if "the address is correct."

A stunned Ito, 49, replied that it was and took delivery. It was a letter from his eldest son, Ryusei, who had been dead for 10 years.

The address was handwritten in Ryusei's familiar writing style. Removing the sticker covering the back of the letter for privacy reasons showed the child’s name in a space specifying the sender.

Ito asked himself “why would a letter arrive from Ryusei now.” It was only natural to wonder, given that his eldest son passed away in winter a decade ago in an accident when he was an elementary school fifth-grader.

On that fateful day, Ryusei was playing at a nearby open area along a river with friends. When he entered the river to collect a wayward soccer ball, Ryusei, who could not swim, found the water very cold.

He was swept away 20 meters before being pulled out of the river by a male passer-by. Ryusei never regained consciousness.

A phone call from the man who rescued his son alerted Ito, who was home at the time, that Ryusei “was in a critical condition.” The father rushed to the hospital while praying that his son “would survive by any means.”

Ito saw Ryusei lying listlessly there. Cardiac massage was continued in an ambulance and every life-saving measure was applied for Ryusei after his arrival at the medical center.

Despite all those efforts, Ryusei never opened his eyes.

Ryusei had three younger brothers. Ito found at times the siblings sobbing following the tragedy. On other occasions, they appeared to try to behave cheerfully in order not to make their parents suffer sadness any longer.

“I must get hold of myself to support my family,” Ito recalled thinking at the time.

He started trying to move past his memories of the accident while encouraging himself to adapt to a life without Ryusei.

Even when asked by people he met for the first time about how many members were in his family, Ito would reply he had “three sons” so he would not refer to Ryosei to save them the trouble of offering their condolences and sympathy to him.

On top of all that, Ito felt shame about the fact that he could not save the life of his eldest son as a parent. He came to hardly speak of Ryusei even with other family members and relatives.

Friends of Ryusei stopped coming by to pay their respects 10 years after his death.

“I really appreciate them for having visited us for so many years,” Ito said. “It was then that I first felt sorrow to become aware that the traces of Ryusei’s life had been fading away. I thus began thinking we should not forget Ryusei.”

The letter reached him around the time. Ito afterward learned that it was written in a school class as part of Gifu Prefecture’s program where students were to ask themselves if they were engaging in eco-friendly efforts when they turned 20 in 10 years.

But what is on the missive is not about environmental issues. It simply reads: “What are my younger brothers doing?”

A closer look at it revealed the sentence “how will my mother and father be in 10 years” had been deleted with an eraser and the phrase asking about his siblings’ circumstances was penned over the erased words.

Ryusei’s mother, Hiroko, 46, explained what her first son must have seemingly thought about while working on the letter.

“Our second son was suffering from a developmental disability in particular, and Ryusei was often caring for him,” Hiroko said with tears in her eyes. “For that reason, he may have been worried about his younger brother’s future.”

Ito reported on the letter on Twitter, attracting messages from parents with dead children who “have had a similar experience” and “were unable to speak of my loss in front of others.”

He was initially surprised by so many responses but now looks at the phenomenon positively.

“The huge grief of having lost a child can never be healed,” Ito said. “But by learning that many people struck by a similar tragedy are remaining strong, I can now feel a sense of peace somewhat.”

Their second son is now grown and has started working full time while the third and fourth children have become a first-year junior high student and a fifth-grade elementary school pupil. As the third and fourth sons were too young to clearly remember their eldest brother at the time, they “rely on past videos on a smartphone to recall him.”

Gazing at the letter, the siblings said it gives them the feeling that their brother “has finally returned home.”

“I did not imagine a letter would arrive 10 years after the death (of Ryusei),” said Ito.

The father said he felt as if Ryusei had arranged when the message should arrive because it occurred amid the season in which souls of dead people are traditionally believed to temporarily return home.

“He (Ryusei) may have returned to coincide with the Bon festival, hoping to make his presence felt more while saying, ‘I am here,’” said a grinning Ito.

Inspired by the letter’s appearance, Ito is thinking of talking more about Ryusei with family members and relatives from now on.