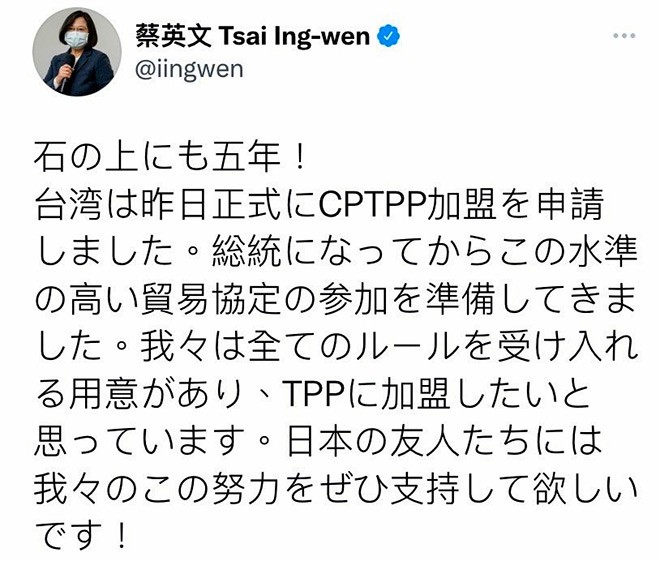 Though Japan welcomed Taiwan’s application to join the Comprehensive and Progressive Agreement for Trans-Pacific Partnership (CPTPP), it also has to avoid antagonizing China, which submitted an application a few days before.

“We share fundamental values with Taiwan and it is an extremely important partner with which we have a close economic relationship,” he added.

Motegi's comments were much more positive than when China submitted its application on Sept. 16. Japan chairs the 11-nation CPTPP this year, and Taiwan is obviously looking to Tokyo for cooperation in joining the free trade agreement.

Taiwan President Tsai Ing-wen tweeted in Japanese about the CPTPP application and wrote, “We want our friends in Japan to support our efforts.”

A ruling coalition source said Japan’s strategy will be to use the negotiations for membership with Britain and Taiwan as an incentive to have the United States return to the CPTPP table. It left the original Trans-Pacific Partnership arrangement under then President Donald Trump in 2017 before it could be ratified.

When Motegi met with U.S. Secretary of State Antony Blinken on Sept. 22, he encouraged the United States to join the CPTPP.

But Tokyo faces the tough task of negotiating with Taiwan while Beijing is also likely to be critical of any such move.

Even without interference from China, negotiations will be difficult because the CPTPP rules cover a broad range of business activities and have set a high target of eventually removing between 95 and 100 percent of tariffs among member nations.

Given such rules, a high-ranking Foreign Ministry official said, “It will not be simple for China to clear them.”

The Japanese strategy will be to negotiate with Taiwan based on those standards and try to delay any talks with China in an ambiguous manner, sources said.

But the consent of all 11 nations is required for any nation to join the CPTPP, so Japan cannot push ahead based only on its own scenario.

(This article was written by Ryo Aibara and Takumi Wakai.)