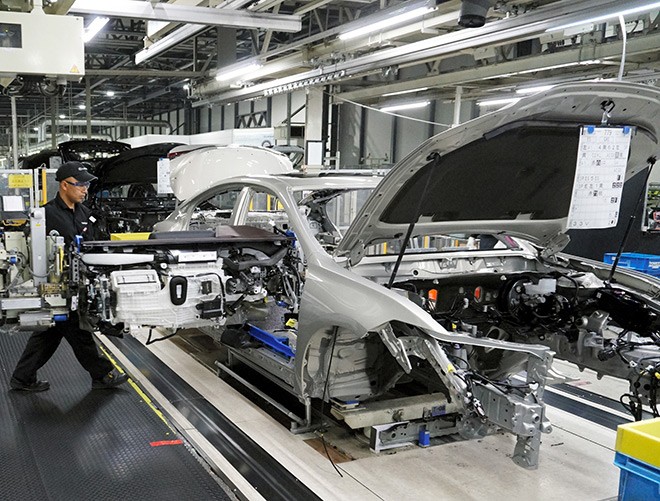 Shortages of parts and other key components as well as the COVID-19 pandemic have put a huge dent in auto production among major Japanese companies including Toyota Motor Corp. and Honda Motor Co.

Shortages of semiconductors used in automobiles from early this year had led to lower production among automakers. Exacerbating the problem has been delays in producing other auto parts in plants in Southeast Asian nations from this summer.

COVID-19 cases broke out among employees at those plants, leading to production delays.

At the end of August, the total decrease in auto production among Japanese companies came to about 930,000 vehicles, but that figure more than doubled to about 1.7 million vehicles in September. That represents about 7 percent of the total number of cars manufactured by major Japanese companies in 2020.

Initially, industry officials felt the production decrease would only be a temporary problem, but the difficulties in obtaining auto parts have continued.

Some companies have had to halt production at some plants in September, forcing potential customers to wait longer before purchasing a car.

Toyota will reduce planned production in September and October by a combined 760,000 units. At one time, all Toyota plants in Japan suspended production.

The suspension means Toyota has been forced to scale back plans for total global production this fiscal year from 9.3 million vehicles to about 9 million.

Honda also reduced its planned production in August and September by 60 percent and the estimate for early October is a 30-percent reduction. As a result, the planned total global sales target has been reduced by 150,000 to 4.85 million vehicles.

A major problem for automakers is the reduced production of wire harnesses that are considered the nervous and circulatory systems of cars because they connect the electronic parts of the vehicle. Along with being time-consuming, the production cannot be easily transferred to other plants.

That means time will be needed before production of wire harnesses returns to normal.

The Daiwa Institute of Research has calculated that under the present reduction in car production, the real gross domestic product for fiscal 2021 will be reduced by 300 billion to 600 billion yen. When adding the effects from sectors other than the automobile industry, the total economic loss is estimated to be as much as 1.2 trillion yen.

(This article was written by Junichi Kamiyama and Naoyuki Fukuda.)