CDP to halt new U.S. base being built off Henoko if it takes power 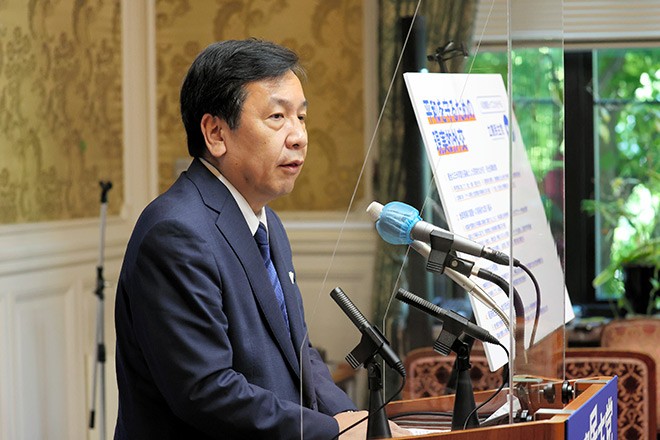 Yukio Edano, the head of the main opposition Constitutional Democratic Party of Japan, announces on Sept. 24 the foreign policy issues the party will focus on in this autumn's Lower House election. (Koichi Ueda)

The main opposition Constitutional Democratic Party of Japan has vowed to stop the construction of a new U.S. military base to replace U.S. Marine Corps Air Station Futenma in Okinawa Prefecture if it wins the next national election.

CDP leader Yukio Edano on Sept. 24 announced policy planks related to foreign policy and national security that the party would use in the campaign for the Lower House election that must be held this autumn.

The CDP, in addition to stopping construction work at the base off the coast of Henoko in Okinawa Prefecture's Nago, would enter into discussions with the United States regarding its military bases in Okinawa if the party emerged victorious in the Lower House election and took control of the government.

Once in power, the CDP would seek an “equal and constructive” relationship with the United States and work to revise the Japan-U.S. Status of Forces Agreement while maintaining its deterrence and reduce the burden of U.S. military bases on Japan.

Regarding the Treaty on the Prohibition of Nuclear Weapons, which Japan has not yet ratified, the CDP policy package made no mention about ratification, but only said it would seek to participate as an observer in the conference of the parties that have already ratified it.