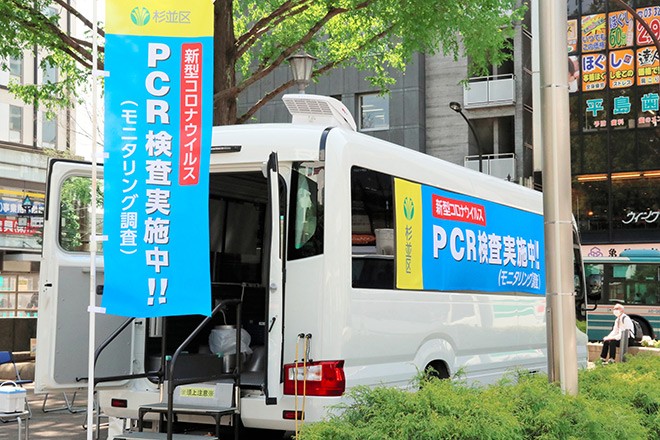 A van in front of a station in Tokyo’s Suginami Ward offers polymerase chain reaction (PCR) tests to encourage young people to be tested for COVID-19. (Provided by the ward)

With asymptomatic COVID-19 patients accounting for 10 to 15 percent of those testing positive for the virus in Tokyo, experts warn that the actual ratio could be much higher given the limited testing being conducted.

An average 17.9 percent of patients who tested positive over the week through May 31 had no symptoms at the time, according to the Tokyo metropolitan government.

But the health ministry estimates in its guidelines for treating COVID-19 patients that around 30 percent of positive cases are asymptomatic. It points out that the ratio is higher among younger patients, citing cases overseas.

Experts attribute Tokyo’s low ratio of asymptomatic patients to the limited capacity of local public health centers in charge of instructing those suspected of having contracted the virus to undergo diagnostic tests.

Asymptomatic patients risk transmitting the virus to others during the incubation period if they fail to notice their infections since the virus is highly contagious even if they do not show any symptoms.

It also asked those centers to set a priority on conducting “proactive epidemiological studies” to effectively and efficiently identify those who have come into close contact with patients and trace infection routes.

That directive prompted public health centers to prioritize carrying out such studies on cases at places where patients are more likely to become seriously ill, such as facilities for elderly people and medical institutions, according to the metropolitan government.

An official of Tokyo’s Bureau of Social Welfare and Public Health admitted that the capital might identify more asymptomatic patients if it tests all those who have come into contact with infected individuals.