EDITORIAL: How to respond to disasters key issue for LDP candidates 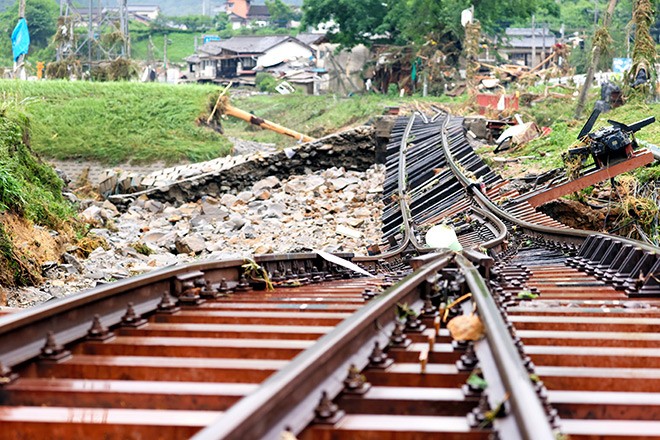 Buckled tracks on the JR Hisatsu Line near Watari Station in Kumamoto Prefecture after heavy rains on July 5, 2020 (Jun Kaneko)

One important role of political leaders is to plan and promote measures to ensure the nation is better prepared against natural disasters and limit potential damage to a minimum. Voters need to hear the candidates for the leadership of the ruling Liberal Democratic Party discuss their plans in depth to tackle this political imperative.

Water-related disasters such as floods, storm surges and landslides caused 650 billion yen ($5.9 billion) in economic damages last year, the fourth highest sum in this category in the past 10 years, according to a preliminary estimate by the land ministry.

Total damage from water-related disasters in 2019, when devastating Typhoon No. 19 struck, came to 2.18 trillion yen, and the figure for 2018 was 1.4 trillion yen. It often happens that different parts of the nation are hit by a new disaster as recovery efforts are under way in another affected area. The government urgently needs to address the nation’s preparedness for a rapid succession of disasters by taking bold new steps.

The spending package will finance efforts to improve the nation’s preparedness against major earthquakes, renew aging infrastructure and bolster the disaster response functions of schools.

There is no disputing the need for continuous spending to tackle disaster-related challenges. But any plan financed by taxpayer money must be rigorously scrutinized to assess the necessity and cost effectiveness of the programs involved.

Taro Kono, the minister of administrative reform and one of four candidates for the LDP presidential election on Sept. 29, was in charge of disaster prevention and mitigation when areas in Kumamoto Prefecture were hit by a cluster of massive earthquakes in 2016. In a book he wrote, Kono made some notable proposals, including a program to train experts in disaster risk management.

Another contender, Fumio Kishida, a former LDP policy chief, said, “Japan will lead the world in disaster damage prevention,” when he, as foreign minister, attended the U.N. World Conference in Disaster Risk Reduction in 2015.

The other two candidates, Sanae Takaichi and Seiko Noda, were responsible for responding to requests from local governments in disaster-stricken areas when they served as minister of internal affairs and communications, respectively. They were involved in Diet debate on legislation to support such areas during the process of developing budgets to fund disaster aid and relief.

All four contenders seem to view disaster management based on their own experiences. But they have failed to offer specific proposals to tackle the challenge from a broad perspective during debates held in the leadup to the election.

The National Governors’ Association has called on the central government to reform the current hodgepodge of disaster-related laws and programs with different purposes, including the law to help disaster victims rebuild their livelihoods, the disaster relief law and various financial aid programs. The association called for the establishment of a fair and integrated system to address these issues.

The four candidates should make clear their responses to these proposals.

A raft of disaster risk management challenges, both urgent and longer-term ones, need to be tackled. They include responses to the risk of large-scale floods in areas around the three biggest bays of Tokyo, Osaka and Ise, mass relocations from areas projected to be hit by major tsunami or landslides and measures to prevent the spread of infectious diseases in evacuation centers.

Experts have long stressed the importance of creating an organization in charge of integrated policy efforts to deal with proactive disaster risk management, emergency responses and post-disaster recovery and reconstruction. But there has been no notable policy initiative to establish such a body.

The LDP presidential debate scheduled for Sept. 25 is said to be focused on disaster prevention and mitigation. The candidates should speak candidly about their views on this issue, referring to lessons they learned from their past failed attempts to promote specific policy measures while serving in key Cabinet and party posts.

Natural disasters cause huge human and financial losses and often lead to wider economic and social disparities. How to reduce the risk of disaster damage and protect the people is a vital policy challenge that will test the nation’s new leader.