Taliban had deal with U.S. to leave Kabul alone during airlift 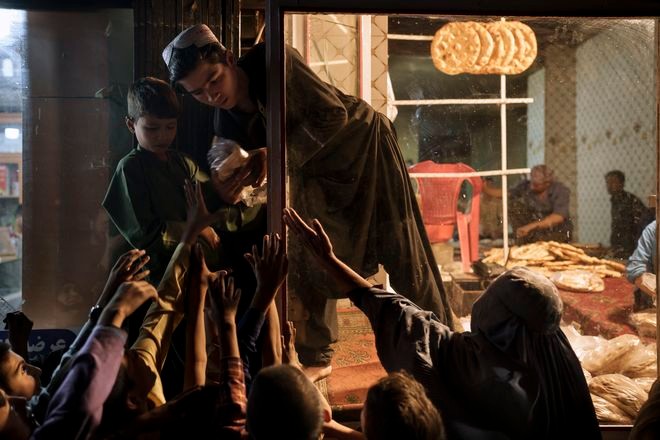 Afghan children and women gather outside a bakery to get free bread in Kabul on Sept. 24. (AP Photo)

DOHA, Qatar--The Taliban had pledged to Washington they would not storm Kabul in mid-August, but the deal fell through because Afghanistan's president and his ministers fled the country in the chaotic multination evacuation airlift then in progress.

Suhail Shaheen, a high-ranking Taliban spokesman who agreed to be interviewed by Asahi Shimbun on Sept. 19, described the talks between the Taliban and a U.S. government official and explained the decision by Taliban forces to break the agreement only a day after it was reached.

Shaheen said a meeting was held in a Doha hotel room on Aug. 14 between Mullah Baradar, who headed Taliban’s political section and now serves as first deputy prime minister, and Zalmay Khalilzad, the special envoy for the U.S. government. Shaheen said he sat in on the meeting.

At that time, Taliban forces had seized vast areas of the landlocked country and the U.S. side asked that they refrain from entering Kabul, considering the deadline of the U.S. troop’s withdrawal by the end of August and the need for those with ties to the United States to evacuate.

Taliban officials agreed, in part because they wanted to maintain the administrative functions of the Afghan government by having staff remain in their posts to ensure a transition in authority from the government of Afghan President Ashraf Ghani.

Shaheen said the Taliban agreed it “will not enter the city and we will talk about a peaceful transfer of power to us.”

But the agreement was in shatters the very next day.

“We wanted to avoid a vacuum of power,” Shaheen said. “There was an understanding that we will wait on the outskirts of the city and not enter until we find a solution to have power transferred to us. But the Ghani administration abandoned the government and the ministers abandoned their ministries.”

Ghani fled the country on Aug. 15. The government stopped functioning as Cabinet ministers also fled. The Taliban encountered little resistance when its forces entered Kabul mainly because the chain of command among government security forces had broken down.

Shaheen said the power vacuum led to “bandits and thieves entering the city and plundering and even killing some people.”

“We were forced to enter the city to protect property as well as the dignity and lives of the people,” he asserted.

While Afghan local media did report on acts of looting, it remains unclear if any killings took place.

Khalilzad, the U.S. special envoy,  painted a similar picture of what unfolded in an interview with Britain's Financial Times newspaper.

“We had an agreement with the Talibs for [them] not to enter Kabul,” he said.

But after Ghani fled Afghanistan, Khalilzad said Taliban officials asked him, “‘Are you going to take responsibility for security of Kabul now?”

The United States could not do so, he replied.

While Shaheen said the Taliban entered Kabul to maintain security in the capital, chaos unfolded as tens of thousands of Afghans rushed to Kabul international airport in a desperate attempt to board outgoing U.S. military flights. On Aug. 16, several Afghans plunged to their deaths as they clung to the landing gear of departing aircraft.

At that point, the Islamic State engineered a suicide bombing near the airport that killed scores of civilians.

In the interview, Shaheen also revealed that the Taliban had begun work on writing a new Constitution.

“The previous Constitution was drafted under the shield of the occupiers, but this Constitution will be drafted in an independent Afghanistan,” Shaheen said.

In an attempt to placate international concerns about the fate of Afghan women now that the Taliban are in power once again, Shaheen said, “We will try to write the basic rights of both males and females of Afghanistan.”

He said a committee to draft the new Constitution would be set up, but did not give a specific date for that move.