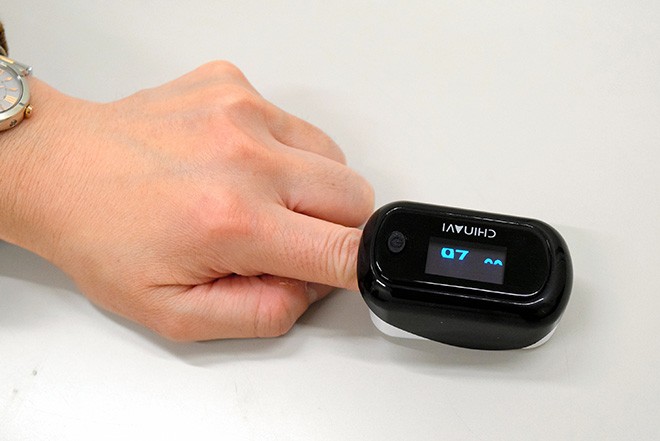 A COVID-19 patient recuperating at home uses a pulse oximeter to monitor the oxygen saturation level in the blood. (Asahi Shimbun file photo)

More than 200 patients with COVID-19 have died so far in 2021 while recuperating at home or a senior citizens’ facility as the nation battled three waves of infections, a study by The Asahi Shimbun shows.

The figure of 72 for August was the highest for a single month this year.

The August figure for Tokyo also shot up, indicating that metropolitan government officials had failed to properly heed the lessons of their counterparts in western Japan.

While the deaths of recuperating patients at home or in senior citizens’ facilities were concentrated in April and May during the fourth wave in Osaka and Hyogo prefectures, the figure fell sharply during the fifth wave.

Tokyo, according to one health expert, did not learn from Osaka's example by adequately expanding the number of hospital beds capable of caring for patients during the fifth wave.

Fatalities were confirmed in 17 prefectures, with Tokyo reporting the highest number at 90. Forty deaths occurred in January and February, the so-called third wave of infections, but there were only two such cases in Tokyo during the fourth wave.

However, the number rose sharply during the fifth wave, with 44 deaths in August alone. Five additional deaths were reported in September as of Sept. 23.

About 9,400 COVID-19 patients in Tokyo were recuperating at home during the third wave, but during the fourth wave the figure fell to around 2,400 at most.

But in late August during the fifth wave, the number jumped sharply to about 26,000.

“It is clear that the medical care structure was under extreme strain (during the fifth wave),” noted a metropolitan government official. “There were many patients who died after their health condition suddenly deteriorated.”

But in the Kansai region in western Japan, at least 44 of the 54 deaths were concentrated in the fourth wave of April and May. In August, Osaka and Hyogo had a combined three deaths.

In May, Osaka had about 15,000 COVID-19 patients recuperating at home and all hospital beds for patients with severe symptoms that required the use of ventilators and other equipment to breathe were filled.

Osaka had 18,000 patients recuperating at home during the fifth wave, so it increased the number of hospital beds for COVID-19 patients to about 3,100 by the end of August, compared with the 2,000 or so beds available in early April.

Osaka also expanded its structure to take calls from patients recuperating at home.

In comparison, while Tokyo had about 6,000 hospital beds for COVID-19 patients in late March, the number had only climbed to about 6,400 by August.

Metropolitan government officials said 66 percent of hospital beds for COVID-19 patients were filled as of Sept. 1.

Satoshi Hori, a professor of infection control at Tokyo's Juntendo University, said the Tokyo medical care structure had very little leeway because the actual number of beds available for COVID-19 patients is lower than the figure given by metropolitan government officials.

(This article was written by Ryoma Komiyama and Kenichiro Shino.)