It's virtually certain no one will speak for Myanmar at U.N. 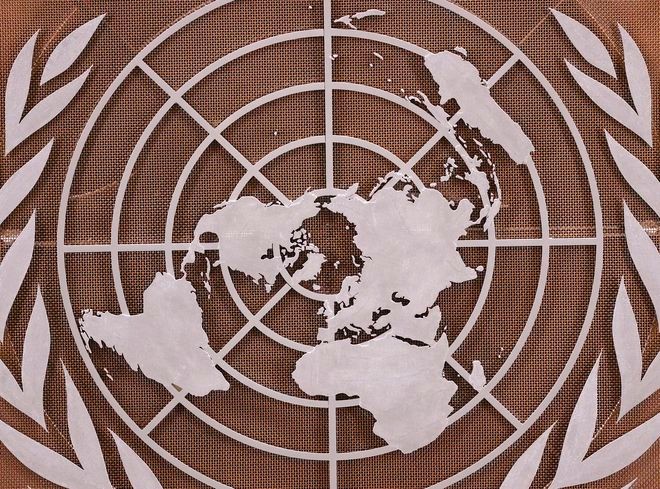 The UN emblem hangs above the podium in UN General Assembly Hall during the 76th Session of the U.N. General Assembly at United Nations headquarters in New York, on Friday, Sept. 24, 2021. ( John Angelillo/Pool Photo via AP)

UNITED NATIONS--The dispute between Myanmar’s military rulers and the civilian government led by Aung San Suu Kyi that they ousted about who should represent the country at the United Nations hasn’t been resolved. But what appears virtually certain is that neither will speak at the General Assembly’s annual meeting of world leaders.

Myanmar was scheduled to be one of the final speakers at the six-day gathering on Monday afternoon. But U.N. spokesman Stephane Dujarric said Friday, “At this point, Myanmar is not speaking.”

Myanmar’s Foreign Minister Wunna Maung Lwin said in a letter to U.N. Secretary-General Antonio Guterres in July that he had appointed Aung Thurein, who left the military this year after 26 years, as Myanmar’s U.N. ambassador.

Lwin said in an accompanying letter that Kyaw Moe Tun, Myanmar’s currently recognized U.N. ambassador, “has been terminated on Feb. 27, 2021, due to abuses of his assigned duty and mandate.”

In a dramatic speech to a General Assembly meeting on Myanmar on Feb. 26 -- weeks after the military takeover -- Tun appealed for “the strongest possible action from the international community” to restore democracy to the country. He also urged all countries to strongly condemn the coup, refuse to recognize the military regime, and ask the military leaders to respect the November 2020 elections won by Suu Kyi’s National League for Democracy party.

Suu Kyi and her elected government were ousted by the military on Feb. 1. A special court in the capital, Naypyitaw, is hearing various charges filed against her and several colleagues. The army takeover was met with massive popular resistance, which is continuing despite harsh measures by security forces.

“We will continue to fight for a government which is of the people, by the people, for the people,” Tun said in a speech that drew loud applause from diplomats in the assembly chamber who called it “powerful,” “brave” and “courageous.”

The 193-member General Assembly is in charge of accrediting diplomats, and a request for accreditation must first go to its nine-member credentials committee.

But assembly spokeswoman Monica Grayley said late Friday there was no word it had met.

It is highly unlikely the committee will meet over the weekend and make a decision on Myanmar’s representation.

That would mean Tun, the current U.N. recognized ambassador, remains Myanmar’s U.N. representative and should speak.

But he said privately earlier this month that he planned to keep a low profile during the General Assembly high-level meeting.

In August, two Myanmar citizens were arrested on charges alleging that they conspired to oust ambassador Tun by injuring — or even killing — him in an attack that was to take place on American soil. According to court documents in White Plains federal court, a Thailand arms dealer who sells weapons to the Myanmar military hired the pair to hurt the ambassador to try to force him to step down. If that didn’t work, the ambassador was to be killed, authorities said.