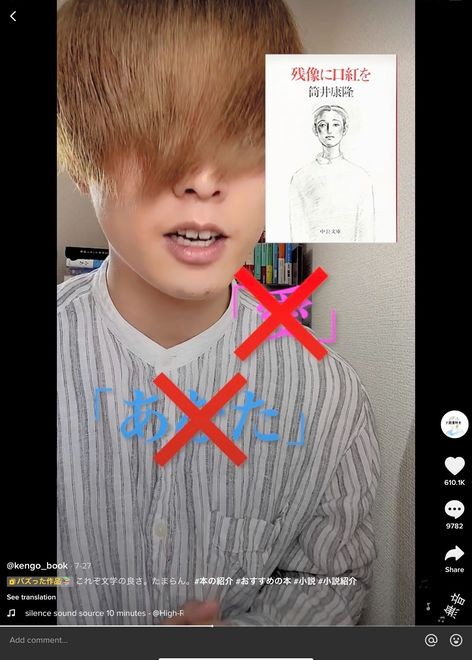 The video-sharing social media app has been used to great success in selling at least one old title.

The young-reader market remains strong. It was just a matter of finding a new way to tap into it.

“It is prejudiced to think that young people don’t read books,” said Kengo, 23, a TikTok video creator who goes by one name. “There is a possibility that, if motivated, they will increasingly enjoy books, just like manga and other entertainment content.”

The TikToker, who has more than 250,000 followers mainly in their teens and 20s, usually introduces romance novels and other light works.

But he decided on a different sort of title in the summer when he was organizing his bookshelves and came across Yasutaka Tsutsui’s novel “Zanzo ni Kuchibeni o” (Lipstick on an after-image) for the first time in a while.

The title, published by what is now Chuokoron-Shinsha Inc., was originally released in 1989.

Kengo said he thought young people would enjoy the novel.

At the beginning of his 30-second TikTok video, Kengo refers to the plot of the book and asks: “What do you think would happen if the syllable ‘a’ disappears from the world?”

Kengo’s previous videos had prompted reprints of some of the titles mentioned. But the reaction to the “Zanzo ni Kuchibeni o” video stunned even the publisher.

The paperback edition of “Zanzo ni Kuchibeni o” soared up the sales rankings on Amazon.com and claimed the top spot in the Japanese literature category in late July.

“It disappeared from store shelves in no time," said Tatsuya Konishi, a publicist at Chuokoron-Shinsha.

The company reprinted an additional 85,000 copies in one month.

Kengo said he thought TikTok would be an effective platform to reach readers who were uninterested in novels because it randomly shows videos in the recommendation page, unlike on YouTube, where users need to click to play the recommended videos.

“If we publishers were to promote the novel, we would probably use catchphrases like, ‘It’s a much-beloved novel over the past 30 years’ and ‘A giant in Japanese literature,’” he said “Instead, (Kengo) found an innovative way to sum up the fun of the novel in a genuine and casual manner.”

In August, book wholesaler Nippon Shuppan Hanbai Inc. posted a video on TikTok to introduce two paperbacks selected by each of five publishers as “books teens should read in summer.”

“A culture of buying and reading books after watching TikTok videos is beginning to take hold,” a company representative said.

(This article was written by Maiko Itagaki and Takahiro Kawamura.)