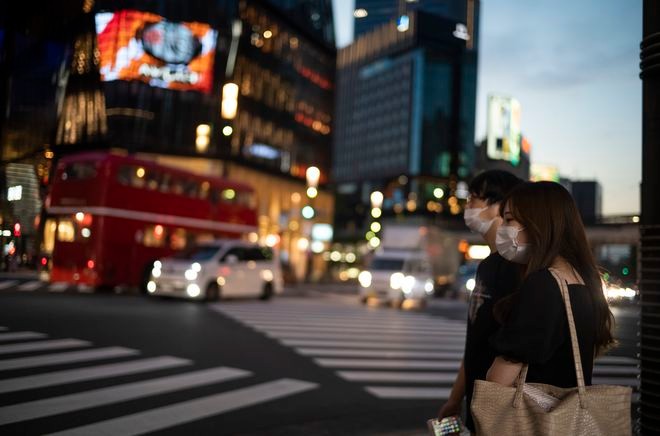 A man and a woman wait for a traffic signal to change at an intersection in Tokyo's Ginza shopping district on Sept. 23. (AP Photo)

Osaka prefectural government officials confirmed 425 fresh cases on Sept. 25, while their Tokyo counterparts said there were 382 cases in the capital.

Osaka also reported that 169 COVID-19 patients had symptoms serious enough to require the use of special breathing equipment as well as four deaths from the illness.

Tokyo confirmed 131 patients with serious symptoms, a decrease of eight from the previous day, along with eight fatalities.

The number of cases in Tokyo dropped by 480 over the previous Saturday. Sept. 25 marked the 34th straight day for the daily tally to remain under that of the same day of the previous week.

The daily average of new cases for the week ending Sept. 25 came to 400.7, or 45.2 percent of the average of the previous week.