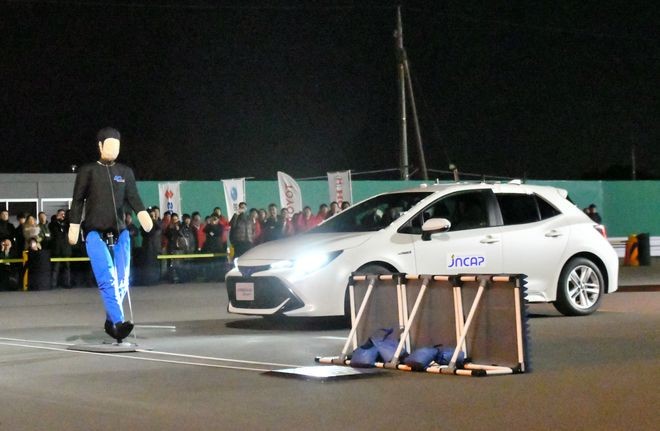 An automatic braking system is tested by the transport ministry and the National Agency for Automotive Safety and Victims’ Aid in the Osaka district of Shirosato, Ibaraki Prefecture, in November 2018. (Asahi Shimbun file photo)

Sensor-operated automatic braking systems designed to prevent vehicles from crashing into other motorists and pedestrians will be required to offer similar protections for bicycle riders.

The transport ministry amended safety standard provisions at the end of September to expand the scope of automatic braking systems starting in July 2024.

Automatic braking systems will become obligatory for passenger cars in increments from November this year.

The safety contraptions are mounted on an automobile and use an onboard camera, or a radar system installed on the front, to detect other vehicles and people. They sound an alarm and apply the brakes automatically when they perceive the danger of a collision.

Currently, such systems are only required to prevent collisions with other automobiles and with pedestrians crossing the road under prescribed conditions.

The systems should also prevent a car running at 40 kph from hitting a pedestrian crossing the road at 5 kph.

Under the new provisions, automatic braking systems should be able to stop a car running at 38 kph from colliding with a bicycle that is crossing the road at 15 kph. They will also be required to sound an alarm before the brakes are applied.

The amended provisions will be applied to passenger cars with a seating capacity of up to nine people and to trucks with a deadweight of 3.5 tons or less.

Starting in July 2024, automatic braking systems for new passenger car models must satisfy the new requirement. Existing car models that remain in production can be upgraded to meet the standard until July 2026.

Although detection technologies have improved, manufacturers may still have to modify their equipment and control programs to meet the new requirement, ministry officials said.

They said only 45.4 percent of new cars were equipped with automatic braking systems in 2015, but the ratio rose to 95.8 percent last year.

However, the officials estimate that less than 10 percent of new cars are equipped with automatic braking systems that work to protect cyclists.

According to National Police Agency data, 419, or 14.8 percent, of the 2,839 people killed in traffic accidents last year were riding bicycles.

Crossings were the most common site of such accidents, accounting for 24,557, or 49.7 percent, of the total.

Officials of the Japan Automobile Federation said drivers should not become overly dependent on automatic braking systems because they may not work in certain conditions.

For example, the officials said, the system could fail to detect an obstacle when its onboard camera or radar is stained with mud or snow, or during foul weather, under backlight conditions or in the darkness.

A properly working automatic braking system may still be unable to stop the car in time if it is traveling too fast or running on an icy road, the officials added.

Transport ministry figures showed that overconfidence of passenger car drivers in automatic braking systems was the suspected cause of 113 traffic accidents in 2019.

“Automatic braking systems are, after all, only there to assist the driver,” a JAF official said. “Their coverages and performances vary, not the least from one car model to another.”

His 18-year-old son, Motohiro, died after being hit by a car while riding a bicycle to school in 2010.

“One of the basics of car driving is to slow down and be more attentive when visibility is poor because of rain, nighttime or other conditions,” Sasaki, 57, said. “Those basics remain the same even if automatic braking systems become more widespread as standard car equipment.”